The  Obolon’ court of Kyiv in the night from Friday to Saturday, January 25th, arrested 14 Automaidan participants for two months, and two others were placed under house arrest, ТСН reports.

“Our courts, as it turns out, work 24 hours. They have examined 15 matters and continue to “work” with others. Two of the detainees on Hrushevskogo were sentenced to house arrest, 14 Automaidaners were sent up for two months. The 72-year-old “attacker” on the Berkut was also imprisoned,” – said the leader of “Udar” Vitaliy Klitschko.

He added that all the accused are

“beaten, with broken noses and bruised heads”, noting that some of them were delivered from the hospital, some were grabbed on the street, some were taken to court from the police station”.

On the night of January 23d “Berkut” staged a night hunt on Automaidan’s participants. They were captured in three places: on Kriposniy alley, near the 17th hospital, and on Institutska street.

“They gave them all two months of preliminary arrest, threatening with six years of prison by the new law. Ukraine has seen 20 new political prisoners. By the way, among them there are people from Kyiv, Lviv, Luhansk, Chernihiv, Ternopil. Azarov, you were mistaken when you said there was only two districts on Maidan. The whole Ukraine is standing there,” – wrote MP from “Udar” Iryna Gerashchenko in her FB page.

This imprisonment serves multiple purposes. First of all, it removes Maidan’s vanguard that scared Yanukovych half to death, organising regular million-person visits to his suburban palace and even blocking it. Previously, A. Yatsenyuk called the trial on the activists of Automaidan ”a revenge for blocking of Mezhyhirya”. Secondly, Automaidan activists were creating serious trouble for the “tutshka” thugs brought from the south-eastern provinces of Ukraine to wreak havoc in Kyiv to facilitate the Emergency state announcement. Daresay, this function of being popular volunteer sheriffs probably inspired the Ultras of Ukraine to unite for protecting Ukraine’s citizens from the mercenary thugs of the regime. Third, they were impeding the police kidnapping wounded activists from hospitals, patrolling hospital grounds.

The story of the Automaidan activists’ capture is no trivial detective story. There are tipper-offers, deception, tailing, traps, car smashing. The account of that night by Yuri Kasianov, Automaidan organser, is a thrilling read (check out link for more!):

“We – Automaidan – have lost many people and many cars. The bandits (Berkut) had set a trap for us, based on our inherent compassion and mutual help. First the berkuters attacked the cars parked on Schorsa Street, where the Automaidaners were keeping watch, so the wounded activists would not be abducted like Verbytskiy and Lutsenko. The cars were smashed, the drivers and passengers were taken by Berkut, beaten, and driven away. After that a Berkut tipper-offer, pretending to be an Automaidaner, reported that he was following berkut buses with abducted people on Rusanivska Street…”

The activists were convicted for alleged attack on the police. The court did not make an effort to explain how, if the Automaidaners were the violent attacking force, it was their cars that bear signs of smashing, and even destruction by a grenade, while the vehicles of the Berkut bear no signs of destruction. The exceptional cynycism of this story is that the corrupt judicial system doesn’t even try to fabricate something plausible – the court listened to evidence only by the Berkut, the “identified” suspects bear no resemblance to the detainees. The court did not manage to explain how a 72-year-old man could assault the Berkut troopers. Furthermore, the treatment of the trapped Automaidaners by the Berkut adds to the hellishness of the situation:

“Sasha said: they kicked us on our legs, arms, heads (no concussion, they rather attempted to knock out my teeth, but with no success). My leg hurts when I walk, I limp a bit now. Small scratches on my face. After that Berkut held a political information lesson for us: took us outside, put us on our elbows and knees into the snow, and held us there for 40 minutes to an hour – and during that time they expressed their vision of Maidan and kept asking us: so anyway how much are you paid?”

And, finally, folk heroes in the hands of the devilish judicial system makes for great hostages which can be traded for influencing street protests: we give you back your heroes, you go back home.

But looking at the photo of Oleksandr Kravtsov behind the bars, I have a feeling that the rotten regime is in for a surprise. “I’m glad that the territory of Maidan is expanding into the prisons,” – he said.

Note. One of Euromaidans’ activists has been lucky enough to escape the polices’ trap, having received considerable traumas, as Auto Maidan activist Serhiy Hadjyniv reported in his FB page.

He noted: “This unique and merry lad is Auto Maidan activist Rostislav Melnyk before and after meeting the brutal scum from SS Berkut. Tow days ago the car which he was in got trapped by the berkuters. Rostyslav was dragged out, cruelly beaten with sitcks… only by unbelievable miracle did he manage to escape. Otherwise he would have ended up in jail like the rest of hos 15 friends. Rostyslad has a broken arm, multiple bruises, open wounds and a lung laceration. Now he is in a safe place, but we must conceal his whereabouts, so the police would not come and grab him… Tomorrow he will have a second operation on his lung…”
censor.net.ua/ 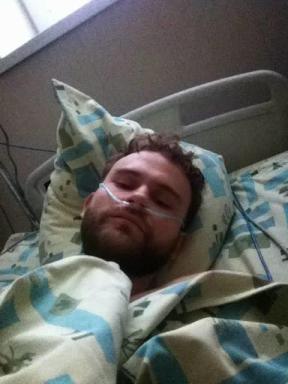 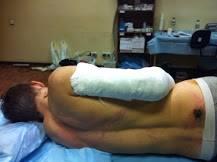 Translated by Alya Shandra from censor.net.ua

Automaidan and the Berkut circus – the deception continues

Why did AutoMaidan become the frontline of Ukraine’s civil protest?