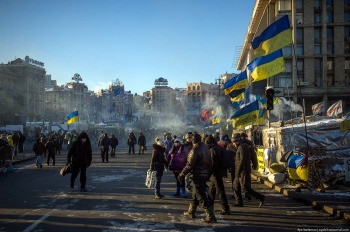 Kyiv is relatively calm now, so it’s just the right time to study Maidan in detail. Almost everybody has heard that word, but not everybody imagines how everything works here. Now the protesters occupy Kyiv’s center – Maidan Nezalezhnosti square, almost all of Khreschatyk (the main street), European square and some of the adjacent streets. A few administrative buidings have been captured; in them, heating and medical help centers have been established, as well as stations for accepting and redistributing clothes and other items. There are hundreds of tents on the streets, in which the activists that have come to Kyiv from all over the country live.

Maidan is astonishingly well organized. This is a small government in itself. It has its own army, storehouses with weapons (glass bottles, sticks, stones), food, it has its own internal press, stores, and, of course, Maidan protects its own boundaries very well. All the approaches are reliably protected from assault by high barricades. At first glance, Maidan resembles a strict regime colony – watchtowers, barbed wire, guards everywhere. Maidan’s defense divisions are well armed with sticks, chains, and bottles with fuel. Within their ranks genuine army discipline is exercised. They march and in their free time learn the art of street fighting. All the defenders are divided into Sotnias (squads), each Sotnia has a commander, sanitary assistant, and even standard-bearer. Maidan has everything that is necessary for life. You can get free food and assistance, if anything happens you will get medical aid. Many people came here two months ago and stayed. Living conditions are, quite naturally, bad. Toilets are the of the usual street cabin type, fires in barrels are for getting warm, and cold tents are for sleeping. I am confident that after the political crisis in Ukraine is resolved a part of Maidan should be covered by a glass dome and made into a museum. Maidan is a Kyiv tourist attraction, and part of it must be retained for the future generations. This is real art.  Let’s begin with the map. I colored Maidan’s territory in pink. Barricades are red lines. The black numbers are numbers of the photos on which these barricades are pictured. I hope orientation will be easier with the map. 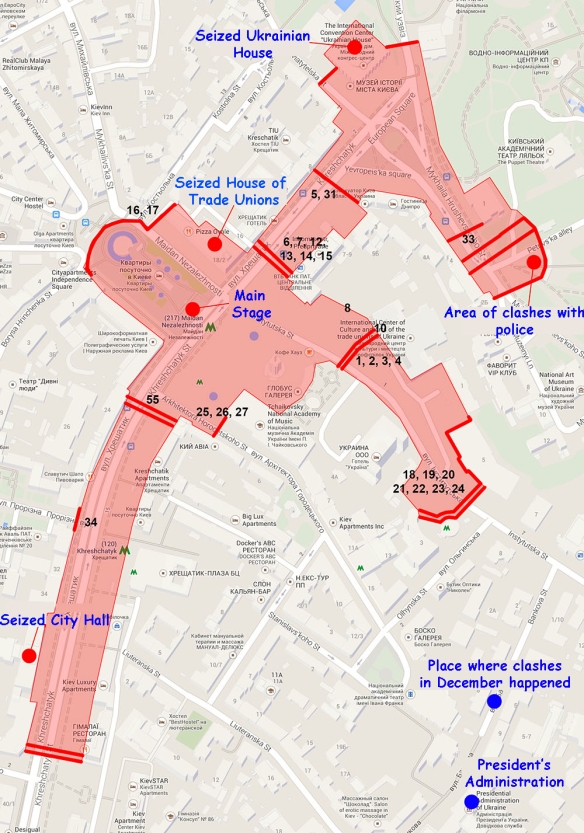 And it’s about time somebody made a virtual tour of Maidan.

01. One of the main barricades on Institutska street. It was stormed a couple of times, and it’s the most reinforced. Pay attention that at the approaches to the barricade ropes have been strung, then “hedgehogs’, then barrels, and only after that does the five-meter barricade come.

02. View from the top. Pay attention, at the left we have a couple belts of obstacles. 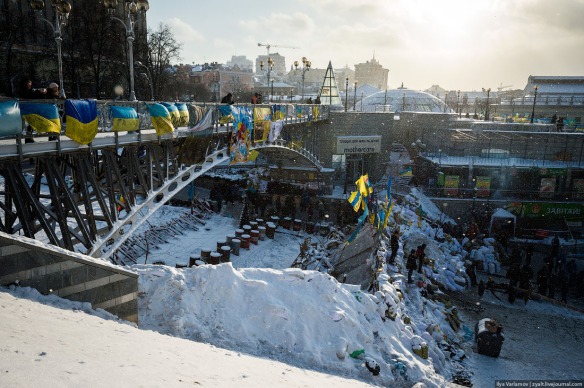 03. The view from the defenders’ side. 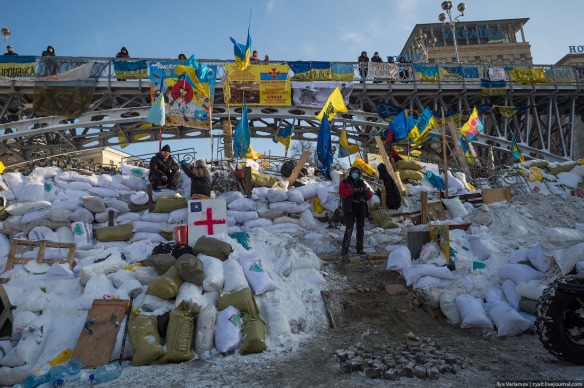 04. A very serious construction, I don’t think a bulldozer would be able to take it down. There is a joke that the only way to take Maidan is to bomb it from the air.

05. The barricades have become Kyiv’s tourist attraction, tourists and locals take photographs next to them.

06. The other barricade on Khreschatyk. It also has a couple of belts of defense.

07. The barricade itself, then a buffer zone, and a fence with barbed wire.

08. All of Maidan’s perimeter is well protected against invasion. I will not be surprised if at one time mine fields will appear around Maidan ) Maybe they are there already? 😉

10. Tires with barbed wire. In case of invasion all this is set on fire.

12. The signs say “Please understand us — we are fed up”; “If you kill us you will have to live with it for the rest of your life” 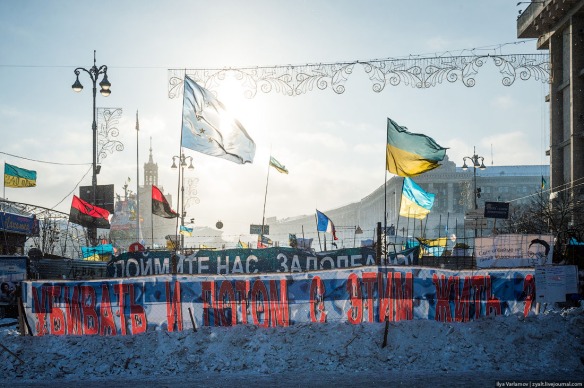 13. There are strict rules at the barricades. The exit and entrance are set apart to different sides of the streets, so the pedestrian flows do not intersect. Multiple defenders keep order.

15. Entrance [Sign says “We are brothers with Russians by blood, but never by slavery. A Sevastopol citizen”]

16. Another entrance on Maidan Nezalezhnosti square. Pay attention to the donation box. Such boxes stand at each entrance.

18. On January 23 Maidan’s territory had expanded, and now one of the barricades is standing right near the metro station “Khreshatyk” 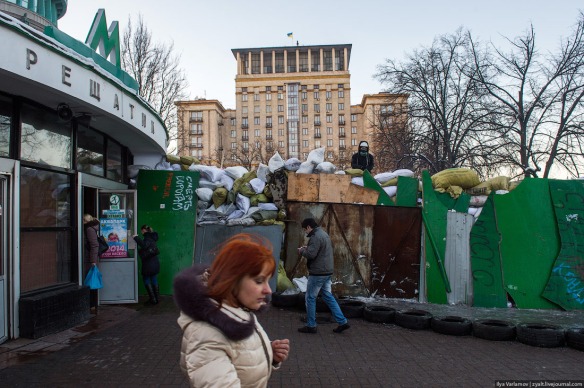 19. Half of the lobby is stacked with sacks. The people are warming themselves in the metro. The metro employees are sympathetic towards the protesters.

20. The metro itself works as usual. 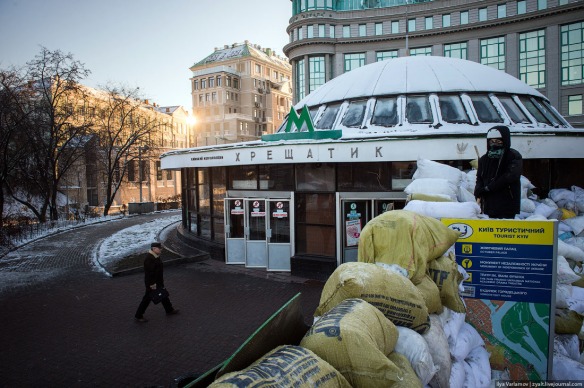 22. All the cobblestones on the streets are dismantled and turned into projectiles.

23. At the foot of each barricade stones lie in case of attack.

24. Another interesting moment. In case of attack all the approaches to the barricades are covered with ice, and only a narrow passage is left for the people. A huge ice rink is now in front of the barricade. 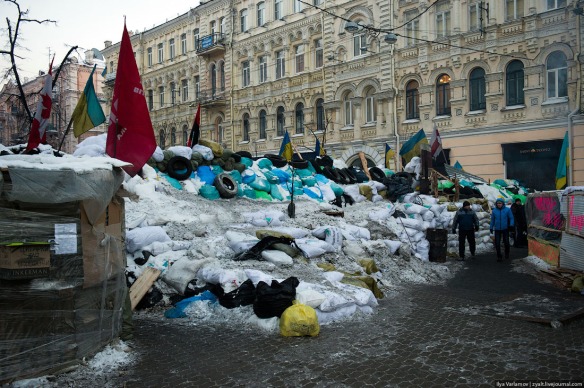 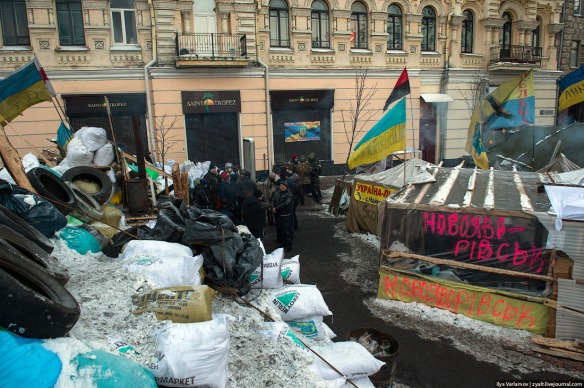 27. Sometimes a very narrow passage is left for the people. One person can hardly pass. Accessibility for fat people is now limited.

28. All the stores inside Maidan are undamaged and, if they desire, work as usual. In the course of two months there have no reports of looting.

31. And how would you assault such a barricade? ) Only with tanks. 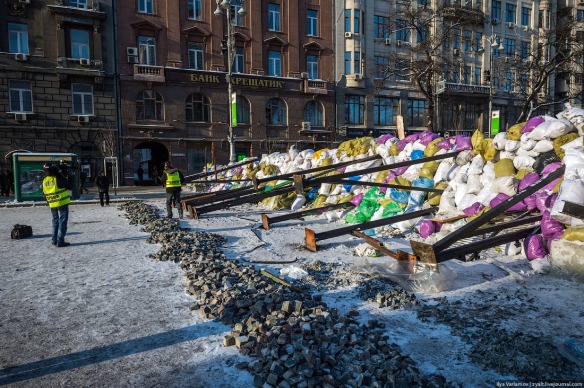 32. The underground passages are mostly blocked to prevent attacks from underground. 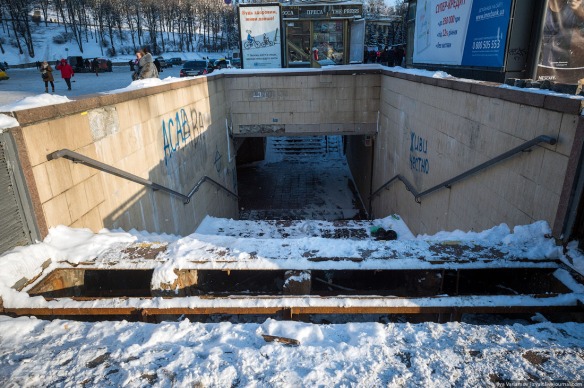 33. The famous barricades on Hrushevskogo. I wrote about them many times, and will not repeat myself. Here all the clashes take place.

36. Earlier only cars drove here, now it’s all for pedestrians )

38. People, tents, flags. And it’s been like that for two months. 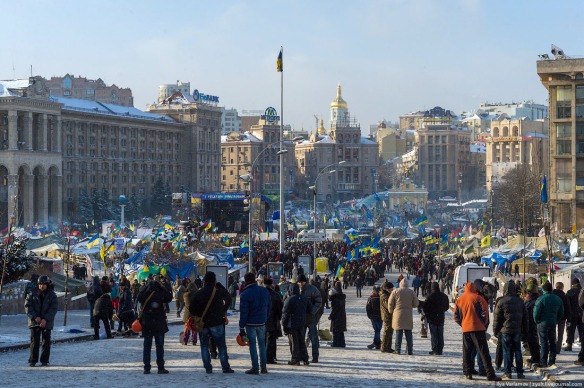 39. There is a stage in the center, from which somebody speaks or performs virtually 24/7.

40. The tents of political activists. 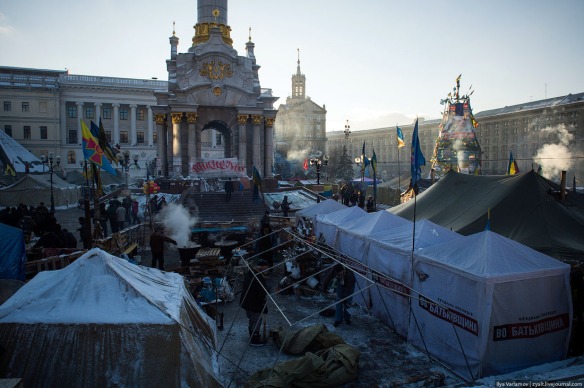 42. Most of the time this camp resembles slums. Only they’re clean slums with many flags.

43. There is free passage through Maidan and ordinary Kyiv locals are used to it and go though it to work and to shops.

44. More tents. Most tents have signs saying from which region the activists are. In this one, people from Chernivtsi live. 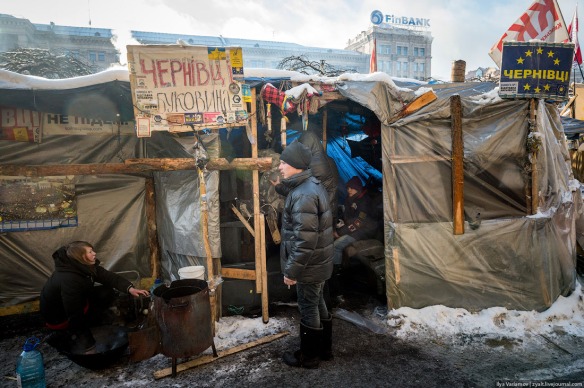 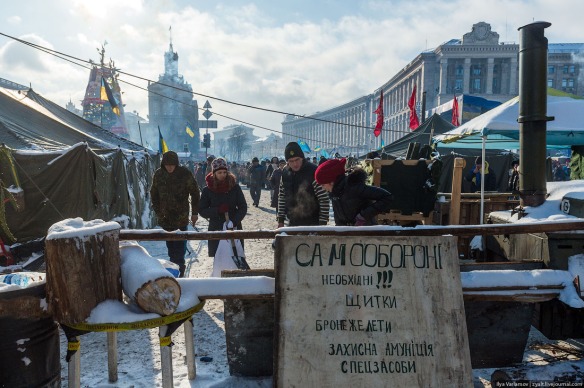 46. Warming station. Pay attention to the shields at the entrance

47. People get warm around barrels and self-made furnaces.

48. Near the House of Trade Unions there is a wall of remembrance for the victims

50. Everywhere there are caricatures and political posters. 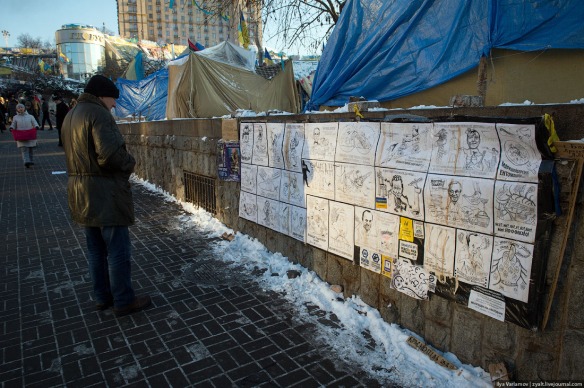 53. Coordination tent of the 1st sotnia, a subdivision of Maidan’s Self-defense army

55. Often somebody brings firewood, food, and medicine. Near the entrances there are many volunteers helping with unloading. 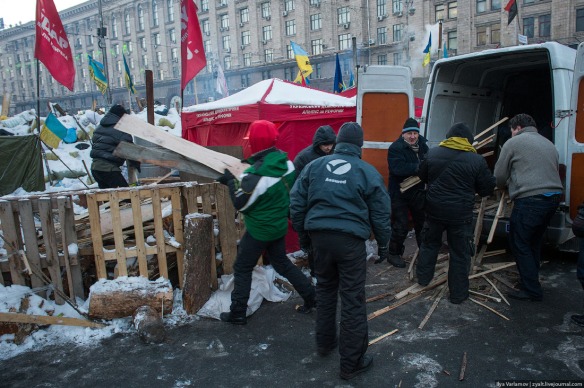 57. Food is prepared in special places. Mostly borscht is made. Sign says “Euroborscht”. 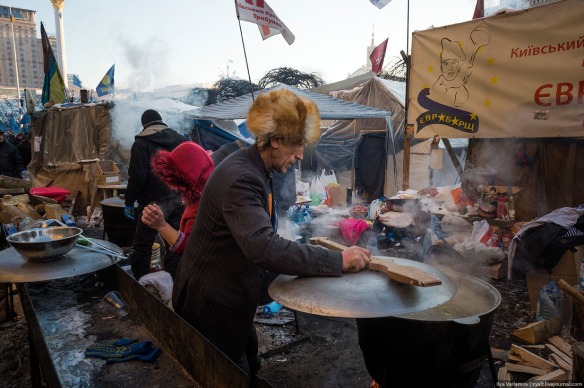 60. Borscht is poured into cups 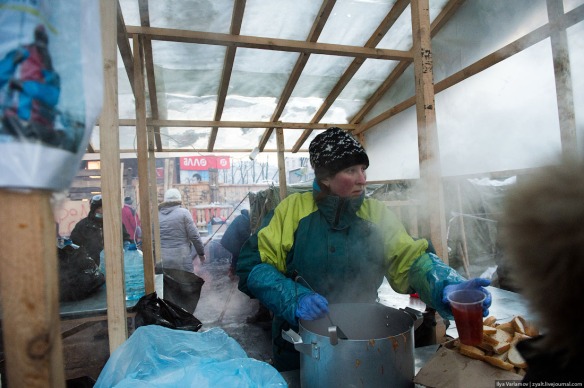 63. Buckwheat, potatoes, or macaroni with meat. 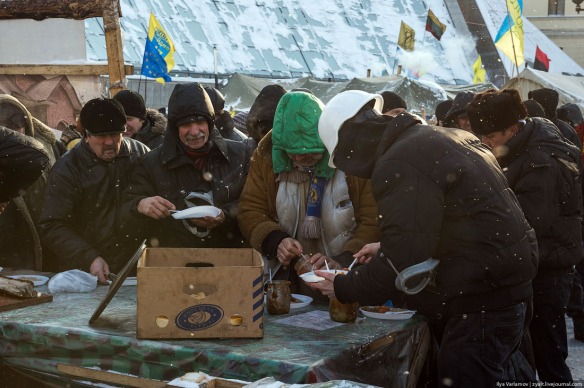 66. Amusingly, all the food kiosks, all the cafes and mobile coffee shops work as they always had. That means you can either get free borscht in Maidan’s canteen or buy a doner in a kiosk. And nobody chases away the dealers, on the contrary, business is going well due to the large amount of people in the center.

68. Snow packed from the street is gathered into sacks. The sacks are used to build barricades. It’s important for the snow to be dense. Such sacks are rock-like and go into place well.

69. Sometimes the sacks are filled with ordinary snow. 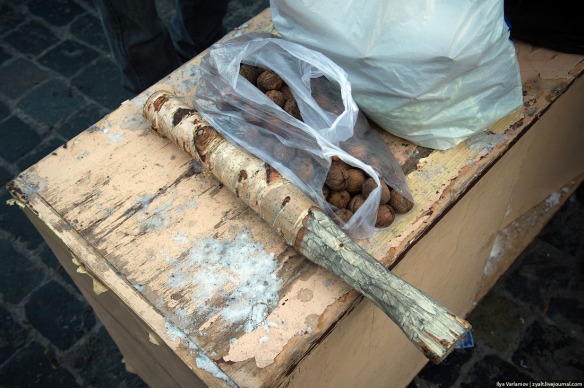 74. Maidan has long become a local attraction. Magnets with photographs and political attributes are sold everywhere.

76. Not a single Christmas tree decoration was stolen [the sign says “no stealing! You’re not Yanukovych, are you?!!]. 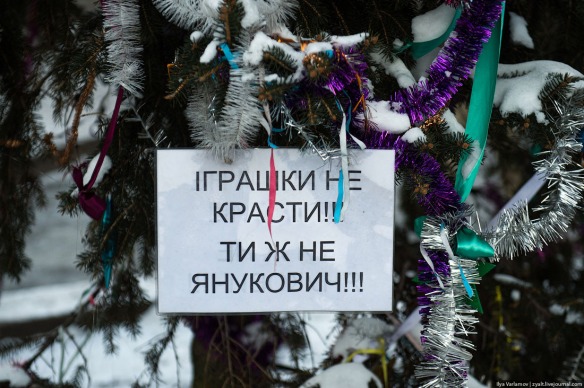 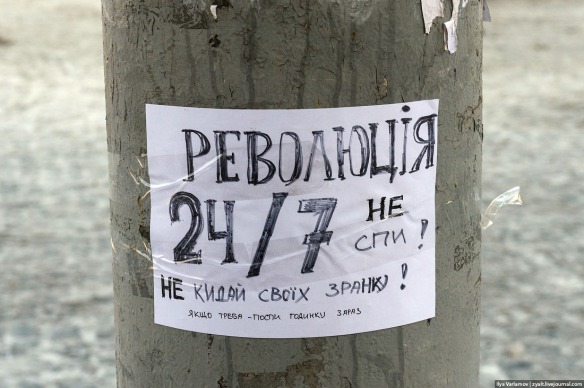 Note. As it later turned out, Ilya Varlamov did an original translation of his material on his LJ

He also has some more Maidan material:

The other side of Maidan – about the Berkut

68 thoughts on “Anatomy of Maidan. Virtual tour of the protesters’ grounds”