The Party of Regions spent over UAH 10 million (USD 1.5 million) to influence American politics. Yanukovch’s associates paid this sum for the services of lobbying firms in Washington, DC. The money was channeled through an intermediary organization based in Brussels.

The European Centre for a Modern Ukraine was established nearly two years ago in Brussels with the purpose of promoting Ukraine in the European institutions. In reality, it became a mechanism through which the Party of Regions laundered their reputation in the West using questionable funds.

The European Centre for a Modern Ukraine was founded by three MPs from the Party of Regions, who since then have moved up considerably in the chain of command: the current Foreign Minister Leonid Kozhara, the chairman of the Verkhovna Rada Budget Committee Yevhen Geller and the chairman of the Rada Foreign Affairs Committee Vitali Kalyuzhniy.

The organization is headed by a German, Ina Kirsch Van de Water, who, along with two other European nationals, was also among the founders. MP Kalyuzhniy from the Party of Regions became the treasurer of the organization, despite the fact that Ukrainian law prohibits MPs to hold management positions in other institutions.

Ukrayinska Pravda has founding documents, which confirm these violations.

After Ukrainska Pravda wrote about Kozhara, Geller and Kalyuzhniy and their involvement with the Belgian organization, the Party of Regions made leadership changes within the Center.

Instead of its current MPs, the list of founders was updated to include some former MPs. Thus, the names of Kozhara, Geller and Kalyuzhniy were removed from the list of the Center’s founders and new names added: former deputy Oleg Nadosha and Alexei Plotnikov, as well as one Ms. Ksenia Solovyov born in 1987.

These documents are accessible for here (Click to enlarge)

The official cover of the European Centre for a Modern Ukraine is publishing information bulletins for Western audiences, which promote the official line of the Party of Regions. The content of the bulletins is prepared very rather carefully in order to veil their association with the Ukrainian authorities, which becomes evident only through attention to certain important omissions.

For instance, take a look at the slide from the Center’s latest presentation. It describes the process of voting of the “dictatorship laws” on January 16. The presentation begins by stating that the parliamentary opposition blocked the Verkhovna Rada Speaker and the Deputy Speaker in their offices yet refrains from elaborating why this happened.

“The Deputy Speaker managed to get into the session hall through a window and put the budget-2014 and a number of “anti-protest” laws to the vote,” the presentation continues. Meanwhile, as Ukrayinska Pravda already demonstrated, these laws established a dictatorship and their impact reached far beyond the protests themselves. “The amendments passed reinforced the responsibility for certain violations. The democratic nature of these laws was heavily questioned.” And that was all.

The presentation also stated that opposition demanded early elections but failed to suggest a single opposition candidate. Yet why should it have done so if the demand for early election have been rejected? The output of the Centre is peppered with such inconsistent silences. 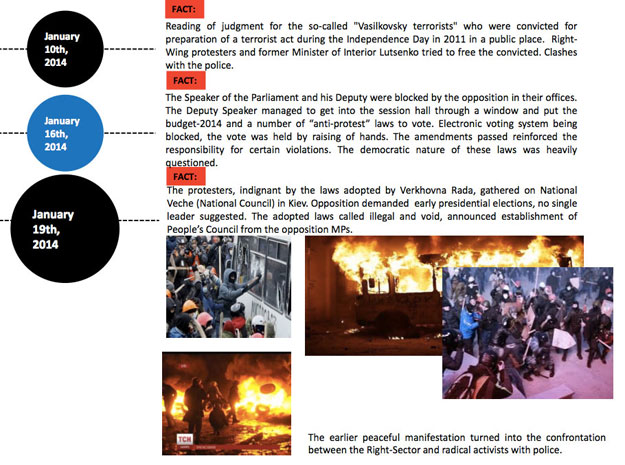 The information bulletins, however, are only the tip of an iceberg. It looks like the main goal of this Brussels institution is to promote the members of the Party of Regions by hiring lobbyists and PR specialists and siphon over cash for these serviced: from politicians with a shady reputation to respectful Western companies.

The EU Commission website reports that the European Centre for a Modern Ukraine 2013 budget was a meager EUR 10,000. Meanwhile, the Centre paid their American lobbyists USD 720,000, which is 50 times more. In 2012, the Belgian intermediary sent some USD 800,000 to American lobbyists. In total, the payments amount to over USD 1.5 million or UAH 12 million.

The following information is taken from the US Senate website.

The European Centre for a Modern Ukraine has official contracts with two lobbyist firms. The first, Podesta Group, was founded by two brothers, Tony and John Podesta. In 1998-2001, John Podesta served as Chief of Staff for President Bill Clinton and since December 2013 has been working as a senior advisor to the Obama Administration. In the last two years, Podesta Group received USD 1.02mn  from the Brussels shop of the Party of Regions.

Below is a report of Podesta Group to the US Senate, stating that it received USD 120,000 from the Brussels intermediary in the fourth quarter of 2013.

The second firm contracted by the Centre is Mercury Clark & Weinstock backed by Vin Weber, who was involved in the latest election campaign of Mitt Romney. During last two years, this firm received USD 500,000.

How the Center, with a USD 10,000 budget, managed to send these enormous amounts to Washington remains a mystery. Ukrainska Pravda contacted Ina Kirsch, the head of the organization, for an explanation but received no clear answers. She replied, “The Center is funded through subsidies by individuals and private companies. Some of the sponsors took upon themselves to finance PR campaigns promoting the Centre.” When asked to name these sponsors, Ms. Kirsch ignored the question.

Ms. Kirsch also stated that “American companies cooperating with the European Centre for a Modern Ukraine have no connection to the Party of Regions. They act to exclusively support the Centre. The Centre has no direct or indirect relationship with the Kluyev Foundation.”

Yet now, we get to the most interesting facts. They demonstrate that the stories about America being unimportant in eyes of the Ukrainian leaders are a myth. Last year, Serhiy Kluyev, a member of the Party of Regions and brother of the Head of President’s Administration, managed to obtain himself a position of the head of the Rada Group for Interparliamentary Relations with the US. He demanded this position and got it despite the fact that he was already heading a similar group for friendship with China. Kluyev was able to achieve this only with the help of the aforementioned Vitaliy Kalyuzhniy, the head of the Rada Foreign Affairs Committee.

Last year, Kluyev visited Washington twice in May and in June. Ed Kutler, the head of Mercury Clark & Weinstock lobbyist firm accompanied him to all meetings in Washington. Ukrayinska Pravda inquired in what capacity was he taking Kluyev around. Kutler did not deny any connection and instead pointed to the European Centre for a Modern Ukraine. “We work with them,” said Kutler. It follows that the Centre in Brussels was not only used to transfer the funds of the Party members to America but also employed the Washington lobbyists to assist Kluyev.

Another thing. In her interview, Ina Kirsch stated that the Centre is in no way related to the Kluyev Foundation. She perhaps forgot to mention that her husband Robert Van de Water, who was an advisor to Azarov in the past, is the Vice-Chairman of the Supervisory Board of the Kluyev Foundation.

In December of 2013, Van de Water occupied this position as he participated in a conference on Ukraine in Washington, DC (click to enlarge). Kluyev’s press service did not respond to the inquiry Ukrayinska Pravda addressed to them in the preparation of this article.

In sum, the emerging scheme is brutal. The funds of an unknown origin but evidently related to Ukraine’s corrupt and anti-democratic ruling regime, through a Belgian intermediary also associated with Yanukovych, have been pouring into American politics to buy lobbying services in order to restore the reputation of this odious regime.

It is only reasonable to ask why the Party of Regions decided to hand over money hard earned by the residents of Eastern Ukraine to “the hated Americans” instead of financing social programs serving their electorate. They, however, will continue to invent cunning explanations and political manipulations to get further enriched at the cost of Ukraine and their own voters. 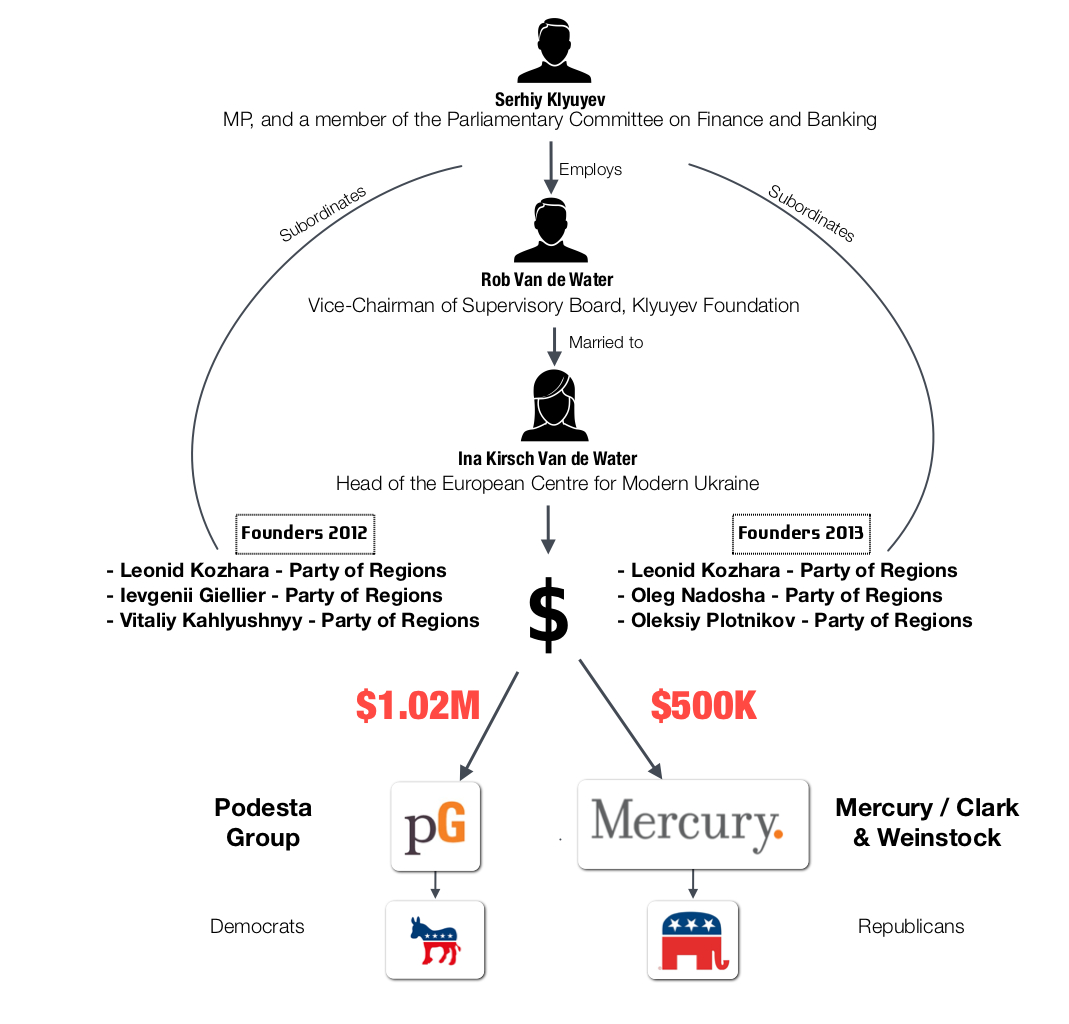 Translated by @iFirebrand and Olya Boychuk