15 February 2014 – “Who are the protesters in Ukraine?” – a response from someone who has actually been (t)here.

Just as I was beginning to believe that the western press may have finally understood that Ukraine’s current street protests have little to do with so-called “radical-right-nationalism”, on 12 Feb. 2014, the Washington Post published an “authoritative” answer to the question “Who are the protesters in Ukraine” by two North American academics, Keith Darden and Lucan Way. Not surprisingly, given that their standpoint is 5000 miles away from Kyiv, the answer Darden and Way give to their own question is (mostly) wrong. The authors are careful to veil their skepticism of the real democratic substance of Ukraine’s protest movement with academically appropriate genuflections towards those who present evidence that contradicts their conclusions, but they nevertheless advance the following highly controversial points:

a) Right-wing politicians are (apparently) disproportionately represented in the Ukrainian protest movement’s leadership. Specifically, the authors note the prominence of the Svoboda party on Maidan, and cite its use of (apparently) xenophobic and racist symbolism as reflecting the party’s (supposed) aspiration to achieve an ethnically pure Ukrainian state.

b) It is unclear (in fact, doubtful, according to the authors) whether the EuroMaidan movement truly represents the democratic aspirations of the Ukrainian people, and whether average Ukrainians really support the protest movement. The fact that the “radical right” is apparently now leading the protest movement is cause for concern (for the authors) because history is littered with examples of revolutions whose leaders become dictators after gaining power, having previously called for greater democratization.

c) It is unclear (again, for the authors – doubtful) that a majority of Ukrainians support integration with the European Union – particularly in the southern and eastern regions of the country where affinity with Russia has strong historical roots. According to the authors, Ukraine’s social cleavages are so deep that unified protest, even against a thoroughly corrupt and incompetent authoritarian regime, such as that of Yanukovych, could not possibly coalesce: Maidan therefore represents only the western and central EU-supporting regions of the country. By implication, such a regionally skewed movement does not deserve the support of western governments. 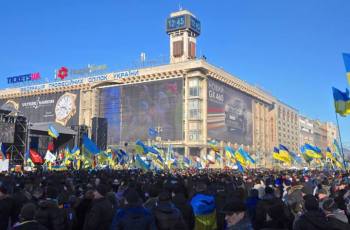 The above theses certainly lend support to the portrayal of those who are protesting in Ukraine as radical right extremists. As a sociologist who spends much of his time speaking to demonstrators in Kyiv’s city center, I can say with some authority: Darden and Way’s portrayal of Ukraine’s protesters is wrong. It is certainly true that Svoboda party supporters are active on Maidan, and that nationalists/patriots (what one calls them immediately indicates one’s political preferences – such is reality in a revolutionary situation) were, and continue to be active, among those who condone the use of violence against the Yanukovych regime. Furthermore, it is a fact that the original name of Svoboda was the “Social Nationalist Party of Ukraine”, but Darden and Way’s sweeping claims that this political movement “employed neo-Nazi and SS symbols” and that “the party does not hide its glorification of the interwar fascist movement” ought to have been corroborated with at least some evidence from reputable sources. 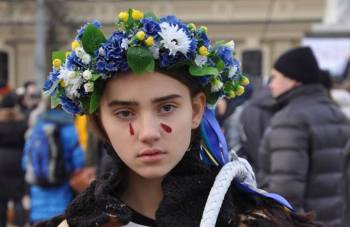 Given that the Darden and Way article appeared as a blog on the Washington Post website, I feel it may be appropriate to frame my rebuttal in terms an American reader will readily understand. The authors have assumed that anyone ascribing to the following phrase should be unequivocally branded an extremist:

“Governments long established should not be changed for light and transient causes; and accordingly all experience hath shewn, that mankind are more disposed to suffer, while evils are sufferable, than to right themselves by abolishing the forms to which they are accustomed. But when a long train of abuses and usurpations, pursuing invariably the same Object evinces a design to reduce them under absolute Despotism, it is their right, it is their duty, to throw off such Government.”

Furthermore, Darden and Way object to the fact that those who subscribe to the core beliefs of the US Founding Fathers, do so in Ukraine while displaying portraits of Stepan Bandera – the leader of the Organization of Ukrainian Nationalists (an organization that propounded an independent Ukraine in the 1930’s, and countered both the Nazi and Soviet invading armies during World War II). Darden and Way would do well to avoid wholesale condemnation of portraits of historical figures. After all, images of American Presidents are printed on US dollar bills of all denominations, and almost every one of these men, at one time, was a slave owner. My point: the factual biographies of historical figures whose images become symbolic of a nation’s patriotism, in the process of becoming “canonized”, often become irrelevant to the nation that has adopted them as symbols. The function of such portraits is to become ‘semiotic glue’ for an imagined community whose real ideological goals may be very different from those current when these figures were alive. Bandera on Maidan is a classic example: for many of the protesters his portrait represents Ukrainian patriotism, and a real desire for political independence, but to equate this desire with belief in an exclusively ethnic conception of the Ukrainian nation is equivalent to saying that any American who takes pride in the portrayal of George Washington on the dollar bill, must also condone slavery.

If the leadership of the protest movement is in fact xenophobic, and the demonstrators are in fact proponents of an exclusively ethnic conception of Ukraine, it is unclear why there are as many Russian speakers in evidence on Kyiv’s Independence Square as Ukrainian speakers (personal observation, supported by survey data). Furthermore, the ecumenical service held every Sunday on the stage of EuroMaidan during the mass rally (“viche”) regularly includes both Muslim and Jewish clerics. The Euro-Asian Jewish Congress has repeatedly denounced false reports of anti-Semitism supposedly emanating from the EuroMaidan movement, instead blaming the Yanukovych regime for inflaming inter-confessional tensions – including staged attacks on synagogues by government-sponsored thugs. The Maidan Self-Defense force recently announced the formation of a Jewish Regiment in addition to the already existent Crimean Tatar (Muslim) regiment; their participants stand side-by-side with “Right Sector” fighters on the barricades. All of this seems to belie the portrayal of the Maidan as promoting an integral nationalist / extremist program for post-revolutionary Ukraine. 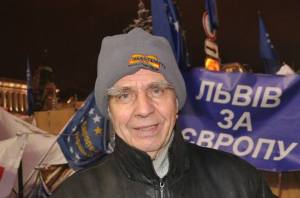 However, the fact that Ukraine’s protesters demonstrate tolerance and inclusiveness now, may not reflect their true intentions. According to Darden and Way, history is riddled with examples of movements that are supposedly built on a democratic foundation, that then resort to authoritarianism after they succeed in gaining power. Such corrosion of revolutionary principles is usually triggered by the need to consolidate power, and suppress any potential counter-revolution. In Ukraine’s case, inherent regional, confessional, linguistic, and economic cleavages, increase the risk of such a degenerative non-democratic scenario. Certainly, the promise of European integration is insufficient as an incentive to maintain inclusive democracy given the patently inadequate level of support for Ukraine’s eventual EU membership currently in evidence. 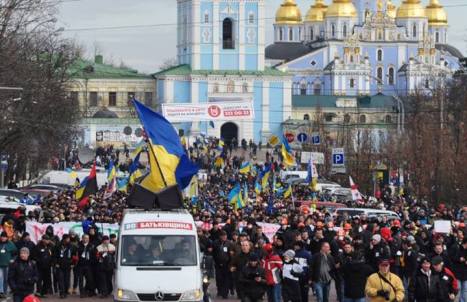 This point is well taken: Ukraine is indeed a large country that boasts significant regional diversity (comparable to Germany in linguistic, religious and economic terms). It is for this reason that survey results consistently showing over 20% of the protesters camped on Kyiv’s Independence Square during the past 3 months as having originated from the eastern and southern regions of the country are seen as encouraging. However, there is little doubt that the protest movement’s primary support is concentrated in the western and central regions, just as the primary support for Yanukovych is in the eastern Donbas. If the promise of European integration is to become the “beacon” that unites Ukraine (as Oleh Hawrylyshyn has suggested), and allows the country to break free of its oligarchic capitalist trap, more Ukrainians must gain first hand experience of life in Europe (current data shows less than a quarter of Ukrainians have ever travelled abroad). In other words, instead of closing its doors to an apparently undemocratic Ukraine, the EU would do well to liberalize its visa regime (possibly even allow visa-free travel) for Ukrainians – a policy that would certainly increase the number of active supporters of EU integration in Ukraine. 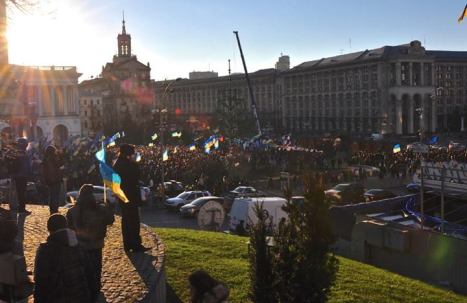 However, such a policy would require good will on the part of Western governments, and not merely cow-towing to Kremlin interests. It is interesting that Russian Foreign Minister S. Lavrov first began referring to protesters in Kyiv’s city center as “extremists” and “fascists” in January 2014 when the demonstrations clearly got out of hand. The term was immediately repeated by several western journalists, and now (most regrettably) by Western academics. Despite numerous calls for a more reasonable appraisal of the ideologies behind Ukraine’s protests, most prominently from both Western and Ukrainian academics who are actually on the ground, faulty appraisals from afar have continued. 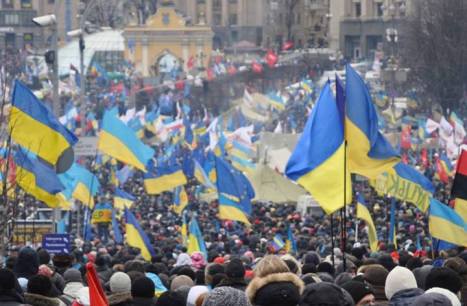 Several observers have wondered if a targeted campaign aimed at discrediting the EuroMaidan movement may not be afoot, but more likely, the propagation of disinformation is not purposeful. In an effort to fit the uniqueness that is the EuroMaidan into inadequate accepted social science paradigms, and at the same time to remain nominally impartial, both academics and western journalists have grasped on the “nationalist” stereotype as one that is easily understood by uninformed readers.

A similar phenomenon occurred during the Cold War when left-wing sympathizers and apologists of the Soviet regime in the West came to be referred to as “useful idiots” by opponents of state socialism. Although this term was often (incorrectly) attributed to V. Lenin, its sense seems to provide a particularly salient description of proponents of the “nationalism-on-Maidan” hype: “useful idiot is a term for people perceived as propagandists for a cause whose goals they are not fully aware of, and who are used cynically by the leaders of the cause.” (Wikipedia)