People on Maidan booed opposition leaders, who took the stage to announce an agreement reached with the authorities regarding the crisis in Ukraine. UDAR leader Vitaliy Klitschko’s speech was interrupted by one of the leaders of Maidan Self-Defense. He came onstage and said that if President Viktor Yanukovych does not resign before 10 a.m. on 22 February, people will start an armed attack.

“We all have reached the crucial moment. We have given politicians the chance to become future ministers, presidents, and they do not want to meet our sole condition: that the ex-convict [acting president] be displaced!” said the man from the stage.“Friends, I do not want to be verbose. I do not want to engage in the same silly talks that we’ve been hearing for two and a half months. I do not trust the difficult political processes which they describe. Seventy-seven people have been killed, and they negotiate!” he added.

“I beg you: Support this suggestion. I tell you from my sotnya, where my father is with me: if by 10 a.m. tomorrow you do not demand Yanukovych’s resignation, we will go in with weapons. This I swear,” said the captain.

The people present on Maidan supported this statement strongly. At this time, the coffins of activists who were killed by security forces during the recent clashes in Kyiv were carried through the crowd and up to the stage. Those present at the scene, including the politicians, knelt on one knee to honor the dead. But that did not assuage the crowd, who heckled the speeches they made afterward. 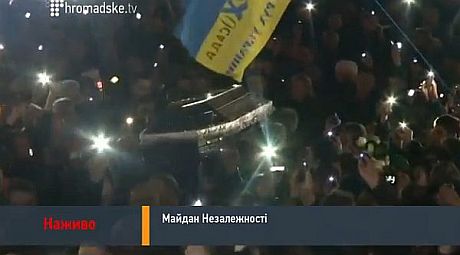 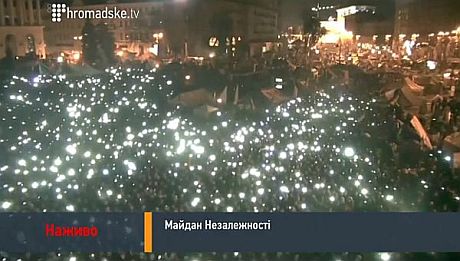 Lights are lit in their honor 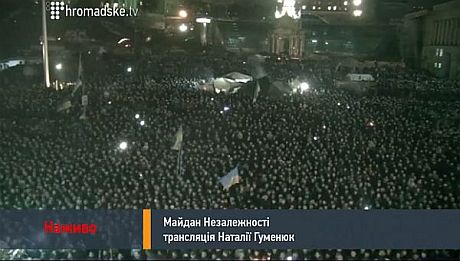 As reported earlier, the three opposition leaders had signed an agreement to settle the crisis with President Viktor Yanukovych. They explained that they signed it to prevent bloodshed and the division of the country.

After the agreement was signed, Verkhovna Rada quickly voted for a number of decisions that were prepared by the opposition: the return to the 2004 Constitution, dismissal of Interior Minister Zakharchenko, dismissal of all cases against activists, and government aid for the victims of the protests and their families. In addition, a draft law was adopted that provides for releasing Yulia Tymoshenko from prison.

The protesters’ demand for Yanukovych’s immediate resignation was not met. Yanukovych only declared his consent for early elections in December.

6 thoughts on “Maidan issued an ultimatum: Yanukovych’s resignation before morning”