In Kharkiv, the protestors will not stop picketing the Regional State Administration (RSA) until Dobkin and Hernes resign. 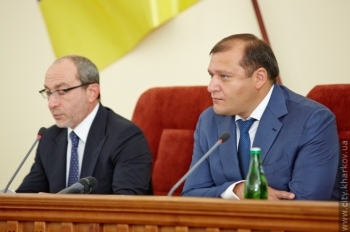 Supporters of Euromaidan in Kharkiv declare that they will not stop picketing the RSA until Mikhailo Dobkin and Hennadiy Hernes resign. According to UNIAN, this information was aired by Dmytro Pylypets’, one of the coordinators of the local Euromaidan, on Espresso.TV. According to him, there is currently a peaceful rally just by Kharkiv RSA, there are no attempts to seize the building and no provocations.“We will keep protesting here while Dobkin still holds his position. Until this demand is satisfied, we will stay here by RSA. Our next goal is Hernes’s resignation. We are not letting neither of them to enter the building,” – Pylypets’ announced. He also added that there are about 300 local “titushki” at the rally, but Pylypets’ assured that the protestors have sufficient means to counteract them. “According to our information, Evhen Zhylin, the leader of “OPLOT” (literally “stronghold”) is wanted by the police, a criminal case was filed against him and he is to be arrested,” – the activist added. “Euromaidan in Kharkiv operates in the 24-hour mode. We are not negotiating who will take what position, we just need to banish Dobkin and Hernes, and we want Zhylin imprisoned,” – Pylypets’ summed up. Source – Pravda.com.ua

Friends, earlier there’d been calls to mobilize for Kyiv, but now the time has come for mobilization for Kharkiv. While in Kyiv, the situation is rather calm and under control, a desperate struggle is going on in Kharkiv. The police are not with the people there. Dopa (Mykhailo Dobkin) and Gepa (Gennadiy Kernes) are there, and they had sent hired thugs (titushki) to Kyiv. Blood really can be shed there. They need your help now. Help send this message! KHARKIV NEEDS HELP

Euromaidan SOS: This information comes from notes sent to us about the situation in Kharkiv. Politicians there are trying to knock down resistance in Kharkiv, but there is an organized community that wants to press on with its demands. We are grateful for the amazing support Kharkivians have given tonight, but warm bodies are needed, as well as food, warm clothes, medicine, notebooks and Internet, bags, backpacks, wood, barrels, and water – call at 0989468488, 0506332209, 0935162618. Translated by William Risch.