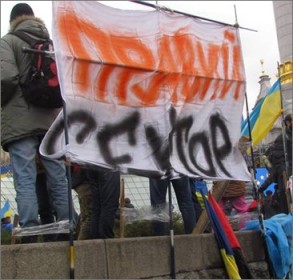 The organization Right Sector claims that resources worth millions of USD are located in the harbor of Kherson, and that associates of President Viktor Yanukovych, ousted by the Rada, are trying to take them out of the country.

This was stated by Andriy Tarasenko, one of the organization’s leaders, reports еizvestia.com.

“Right Sector representatives were made aware that Yanukovych’s associates and their mafia had gathered resources worth millions of USD that were stolen from the Ukrainian people. After receiving this information, Right Sector fighters entered the port area and surrounded the cargo containers and bookkeeping, preventing it from leaving Ukraine in an unknown direction,” reported Tarasenko.According to Tarasenko, members of the local security forces, the leaders of which were appointed by Yanukovych’s regime, tried to remove Right Sector from the port area in order to prevent them from interfering with the cargo’s exportation. However, the security forces gave up, and the Ukrainian Prosecutor’s Office is now on the site.

Regarding their actions, Right Sector states, “[I]f, during the times when the treasury of Ukraine is empty, when the government is now on the edge of default, the current authorities won’t take prompt actions to save the stolen assets and won’t stop the attempts of Yanukovych’s mafia associates to take treasures out of Ukraine, we reserve the right to use force to stop this lawlessness,” said Tarasenko.