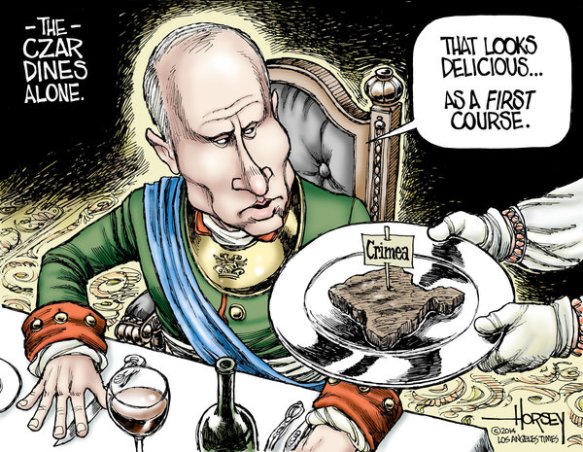 By Volodymyr Yermolenko. An open letter to Die Welt newspaper

I was surprised to read an article yesterday published in your newspaper and written by Mr. Ulf Poschardt calling on the West to “embrace” Putin. The provocatively-titled article did not once mention Ukraine after the first paragraph, as if the country at the centre of today’s events did not exist.

You might have forgotten that the tensions between the West and Russia are ABOUT Ukraine, and more precisely about the values of human dignity that the Ukrainians are fighting for.

You call on the West to stop “demonising” and “barbarising” Russians and instead to give a friendly hug to Putin. I wonder if Ukraine wouldn’t get in the way of that hug.

In recent decades, relations between Germany and Russia have been developing as if Ukraine’s existence were ephemeral— as if you could simply build a bridge over a territory of over 600 thousand square kilometers and 46 million people and just walk over it from Berlin to Moscow without noticing or mentioning the land below.

Also, in recent decades, these relations have been developing as if Russia were Germany’s only remaining problematic “voice from the past.” Berlin has successfully reconciled with almost all its 20th Century enemies (US, France, UK, Italy, etc), and it seems that reconciliation with Russia is a goal to be achieved at any cost— even if that cost includes the fate of former Soviet Union countries like Ukraine and Belarus.

But let me remind readers that it was Belarus, Ukraine, and Poland that suffered most as a result of World War II. It was these territories that became the “Bloodlands” (an appropriate term coined by Timothy Snyder) between 1932 and 1945: home to the biggest massacres in recent human history, with the loss of 13 million civilian lives (and dozens of millions soldiers’ lives) and immeasurable suffering from the twin totalitarianisms of Stalin and Hitler.

I personally commend Germany’s ever-growing voice in today’s Europe. I follow the German press closely and I appreciate that most media are voicing their support for Ukraine’s democratic transformations. I call on them to understand that Euromaidan is a revolution of dignity.

But Euromaidan’s events shift some of the key emphases. In recent months, Ukraine has contributed a new rhythm to Europe’s history. It has become the epicenter of a young, enthusiastic, energetic Europe where people believe in human dignity, fight for it, suffer for it, and even die for it. I have called this new Europe a «Europe of belief» as opposed to (and complemented by) a «Europe of rules».

My message to you is, therefore, simple: embrace Ukraine, not Putin. With Ukraine you can make sure that you will get a friendly hug in return.

1 thought on “Embrace Ukraine, not Putin”