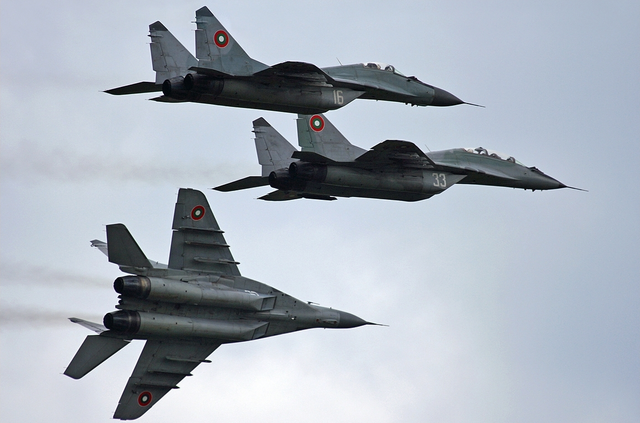 By invading Crimea on phony pretexts and by denying repeatedly the realities of events, Vladimir Putin has shown himself to be a raving lunatic. So far, the West’s response has been pathetically weak, as its leaders seem unable to grasp the full extent of Putin’s actions and further plans. With more than 100,000 men on Ukraine’s Eastern border and reinforcements pouring into Crimea and the Russian occupied Transnistria region in Moldova, Putin is setting the stage for an invasion of Ukraine proper.

Tough economic sanctions or a well-organized and equipped Ukrainian Army could deter Putin from further aggression, but since Germany, Italy and the United Kingdom, the most important trading partners of Russia, are refusing to contemplate sanctions and as the Ukrainian Armed Forces are no match for the Russian Armed Forces in a conventional war, there is little that will deter Putin from invading other parts of Ukraine as soon as he finds a fitting pretext to present to the Russian people.

Luckily, such a pretext has not yet appeared, thanks to the remarkable loyalty, courage and restraint of the Ukrainian troops in Crimea, who even under grave threat have neither surrendered nor resorted to force, and have thus denied Putin his desired pretext for an all-out war. This has given nations willing to help Ukraine deter further Russian aggression a short window to arm and equip the Ukrainian Armed Forces enough to make a Russian invasion too risky, and thus prevent all-out war. The United States, Canada, Sweden and the Eastern European nations, who have already declared their will to help Ukraine substantially, have to act quickly and act alone – without waiting for the corrupted nations of Western Europe to come around. Besides supporting the government in Kyiv financially and diplomatically the following must be done to deter Russia from all-out war and to strengthen the Ukrainian resolve to stand up to their bullying neighbor:

Additionally each nation should draw up a list with further surplus equipment that could be shipped to Ukraine if requested – especially T-72 tanks (of which 1300 are stored by Eastern European Armies), BMP-type infantry fighting vehicles, self-propelled artillery systems and mobile short-range air-defense systems should be on these lists to reassure the Ukrainian military that combat losses can be replaced quickly.

All mentioned weapon systems are of Soviet or Russian origin and therefore only a stop-gap measure to prop up the Ukrainian Armed Forces in the short term. In the long-term Ukraine, as well as all Eastern European nations, will need Western weapon systems to replace Russian equipment. Therefore complex Western military systems – like e.g. German Bremen-class frigates, Italian Sauro-class submarines, Lupo-class and Maestrale-class frigates and American, Belgian, Danish, Dutch and Norwegian F-16 fighters – which are scheduled to be decommissioned, should be transferred to Ukraine and other Eastern European nations, including Moldova and Georgia in the coming years.

While these measures might work to deter Putin from all-out war in the short term, they are not certain to do so. Ukraine’s military suffers from 20 years of neglect and the aforementioned measures would only make it much more costly for Russia to win a war, but it would not make it impossible for Russia to win a war. Only an expansion of the Ukrainian Armed Forces and a complete overhaul of its organization, equipment and materiel can ensure long term deterrence against Russian aggression. But we have mere days to act now, and therefore transferring equipment the Ukrainian Armed Forces can instantly put into service are our best option.  The only other two quick options that would deter Putin for certain from all kind of aggression carry much more risk: either Ukraine attains nuclear weapons; or European and American combat brigades move into Ukraine right now for a “multinational training exercise” – about which Putin, who is so overly fond of holding military training exercises that are “unrelated” to current political events near contested territories, could hardly complain.

Thomas Theiner is a writer and production manager. He has previously lived in Kyiv for 5 years and worked at a subsidiary of Ukraine’s biggest film company.