The vote on January 16 for the “dictatorial laws” marked a turning point in events on Euromaidan. After Christmas and New Year holidays the protests began to diminish and many activists were busy trying to save their cars from arson. It seemed that the revolution was tapering off. But Yanukovych’s decision to adopt a package of anti-democratic laws at any cost changed the whole scenario. A peaceful protest was radicalized.

What compelled Yanukovych to pour oil on the fire and provoke a new aggravation from which never recovered? He was clearly following Kremlin scenarios, and his escape plans had been worked out several months before the bloody events. During the first ten days of January, Yanukovych held a secret meeting with the Russian President Vladimir Putin, during which a decision was reached that Ukrainian authorities would fully suppress the protests and  approve repressive laws.

That conclusion emerges from the contents of the notebook belonging to Konstantyn Kobzar, the head of Yanukovych’s security and a former employee at the Headquarters of the Ministry of Defense Intelligence. It was found in the Mezhyhirya residence by researchers from the “YanukovychLeaks” initiative.

Ukrainska Pravda is publishing the contents of Kobzar’s diary relating to events during December 2013 and January 2014 — critical weeks in the country’s history. In fact, Kobzar was not only a security guard but also Yanukovych’s assistant. He carefully noted Yanukovych’s instructions and the phone calls he received from influential people.

According to information from Ukrainska Pravda sources, Kobzar also received huge sums of cash on behalf of Yanukovych, which were given to him as bribes. This faithful service was much appreciated by the “Mezhyhirya butcher”; he kept promoting his servant. During the presidential vote of 2009, Kobzar was a lieutenant, and on independence day in 2013 he was promoted to major general. 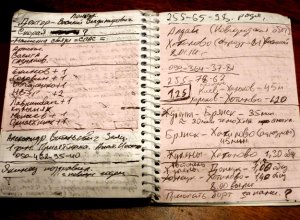 On the left page Yanukovych’s guard carefully lists people. It is obviously a guest list for celebrating New Year or Christmas with Yanukovych.

Then, the names of the guests are recorded:

Ekymov – code name for Prosecutor General Viktor Pshonka in Yanukovych’s security, as confirmed by this transcription found in Mezhyhirya.

NVER – this person has not been identified. Any help from readers would be appreciated.

Lavrynovych – former minister of justice.  Today head of the High Council of Justice.

Prysyazhnyuk – minister of agricultural policy, who worked closely with Yanukovych at the Ordzhonikidzevuhillya coal mine in the 1980s.

The right page is devoted to preparations for the secret meeting between Yanukovych and Putin, which took place on January 8, in the Russian president’s residence at Valdai. Yanukovych’s security head calculates the most convenient flight itinerary to Valdai, which in his illiterate fashion he calls “Aldai”.

The landing point is shown to be the Khotilovo military airfield in the Novgorod region.

Later, we have time itineraries for the route: Hostomel, Kharkiv, Khotilovo; Zhulyany, Bryansk, Khotilovo; Zhulyany – Donetsk – Khotilovo. There is also the note “boarding to be provided.” What is being discussed is an alternate flight through Putin’s aviation.

Obviously the Valdai meeting was devoted to Yanukovych’s behavior during the political crisis. It was the price of further financial support for Yanukovych’s regime at the expense of the Russian budget. By forcing Yanukovych to operate in the wake of antidemocratic laws, Putin significantly complicated his dealings with the West while also demonstrating to dissatisfied Russian opponents that his methods were gaining new adherents.

Apparently the Valdai meeting was thoroughly prepared and needed to take place at that location to avoid attracting too much attention. On another page Kobzar writes:

“The pilots of the Falcon (private jet that was leased to the presidential administration for the needs of  Yanukovych and his firm Tsentraviya – UP) are asked to fly to Moscow. Particular airfield. Will return the same day. Will not spend the night. Request to provide own ramp as there are difficulties on landing.” 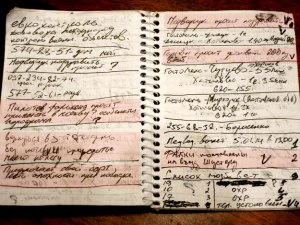 In those days Kobzar also wrote other notes that reveal the dictator’s contacts: “Medvedchuk sends best wishes.” Herman asks to establish special delivery in the office.” “Flags placed for Shuster’s departure.” The story about Shuster’s ban from Ukrainian territory is thus confirmed.

On another page of the notebook Kobzar indicates:  “Shuster banned from entering Ukraine. Yakymenko SBU?” Obvioulsy this note refers to Yanukovych’s intructions that were to be transferred to the head of Security Services Yakymenko.

Obviously these are dates referring to appointments. With the Defense Minister Lebedev – January 8; with deputy head of the presidential administration Larin — on January 13. The “02” indication refers to the head of Verkhovna Rada Volodymyr Rybak. He was expected shortly after the New Year.

A revealing note appears on the same page spread – “gate, phone tape, without frame ” This refers to the fact that even Yanukovych’s senior guests had the cameras on their mobile phones sealed up. “Center FOK 70, APK. Everything goes through center FOK.” This refers to guest access to Mezhyhirya: everyone had to go through the fitness center central entrance. Even people who are marked code “70” and “APK”. APK stands for Andriy Petrovych Klyuyev.” So far we have not been able to identity “70”. Here it is indicated “wine baskets from 70” — referring to a New Year’s gift to Yanukovych.

“Neighbor talked today with Symonenko — preparing all kinds of crap for departure.” “Neighbor” is the code name for Viktor Medvedchuk.

The next notation: Yanukovych’s dissatisfaction with the absence of the Interior Minister in the midst of events on Maidan. “Zakharchenko don’t go on vacation anymore.” On the following page: Yanukovych’s dissatisfaction with the publication Ukrainska Pravda. Even the Attorney General Pshonka is brought in. Here the issue has to do with the article reporting on the interrogation procedures for the former Kyiv Municipal Administrator Popov and the former deputy Secretary of the Security Council Sivlovych regarding events of November 30. As reported, Popov provided direct testimony about  Andriy Klyuyev’s involvement in the dispersal of Maidan.

“How come Ukrainska Pravda has all these documents on interrogations? Find out and we’ll call you back. Pshonka, after 14:00. Call.” Kobzar writes down Yanukovych’s instructions.

On another page: the list of people trying to reach Yanukovych in the midst of the crisis. The names speak for themselves.

Kaufman asks for the report and sends New Year’s greetings

Another page. Again “Kurchenko asks for appointment“. Then “Demyshkan important question.” Demishkan is one of the founders of the hunting club “Kedr” which leased the hunting lodge “Sykhpluchchya” for Yanukovych family interests.

Several times “Yura Enakiyivsky” called Yanukovych to inform him he had arrived in the country.

Yvanyushchenko in Kyiv. Asks for news.

Kurchenko urgently tried to reach Yanukovych. In one of the notes Kobzar points out that an issue has been agreed on with the First Deputy Prime Minister Arbuzov.

Kurchenko asks for an appointment at any time. It must be at three o’clock and he’s here. Arbuzov agrees.

However, Arbuzov himself said a year ago that “he doesn’t know what Kurchenko is doing.”

It is interesting that on the same page the name of the MP from the Svoboda party Yuriy Bublyk appears. In two places. The MP himself said that at approximately that time he was in Mezhyhirya with assistants and was shooting a video of the residence.

The next page contains a leak from the Euromaidan Council meeting. Someone reported on the proceedings of the meeting to Kobzar.

Euromaidan committee meeting in the Trade Union building. Discussion on how to finish with Euromaidan beautifully and smoothly. First proposal, a 2-3 day event with a crowd of thousands.

“Ekimov” is the code name for the Attorney General Pshonka. Obviously, this conversation was also generated by Maidan. In the notebook the events of December-January are noted. This is when the shutting down of metro stations in the center first began with the intent of keeping new protesters away from Maidan.

A separate section in Kobzar’s notes has to do with the number of soldiers of the special forces assigned to Mezhyhirrya. The number comes to 700!  Two armored vehicles were also included.

In addition to Yanukovych’s secret meetings and his scenarios for suppressing democracy, Kobzar’s notebook also contains another riddle — Yanukovych’s contacts with Russia.

On this page there is a Russian phone number and only the patronymic – “Yevgeny Viktorovich.” Perhaps it is the vice chairman of the Council of the Russian Federation Yevgeny Viktorovich Bushmin, who represents the Rostov region in the Senate. This is where Yanukovych fled when he was escaping from justice for murdering his own citizens. However, the person who answers at this number states that “an error has occurred.” “My name is not Yevgeny Viktorovich” the voice says and slams the receiver.

An inscription on the right side contains the calculation of the special forces involved in the protection of Mezhyhirya. What is evident here could shock members of the special services. Even the Ministry of Defense Intelligence, which is supposed to gather military intelligence beyond the territory of Ukraine, was used to run errands. This is the next–but certainly not the main–legal violation of Yanukovych’s regime.