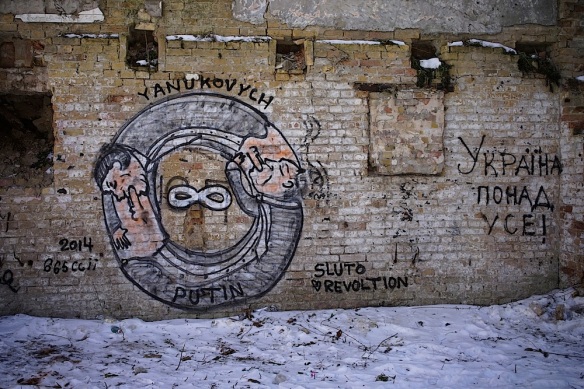 Graffiti on wall in Kyiv. The graffiti on the right says: Ukraine above all! And on the left, Putin and Yanukovich’s mutual support actions throughout infinity are self-explanatory. Photo by Giles Clarke / Getty Images.

The things that I write probably would be worth writing in two languages [Russian and Ukrainian], but I will write only in Ukrainian. Because, first of all, we need to understand it ourselves. Only then can it be understood by someone else.

1. Putin and Maidan [Independence Square at the center of Kyiv, and the center of the Ukrainian revolution] are incompatible in one and the same time and space, because Maidan knocks all the ground out from under the feet of followers of the “Russian world.” There have always been two Russias: the Russia which is about the “brotherhood of nations” and…