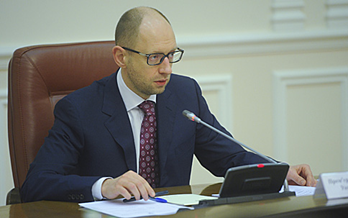 On March 16, 2014, during the session of the Cabinet of Ministers of Ukraine Prime Minister Arseniy Yatsenyuk charged the Minister of Foreign Affairs of Ukraine Andriy Deshchytsya with a mission to get ready to protect Ukraine’s interests in the process of distributing assets of the former USSR with Russia. “Ukraine has legitimate and legal claims to Russian Federation regarding the assets that Russia has reserved for itself. I ask you to prepare the legal reasoning for the protection of national interests of Ukraine regarding the distribution of the funds and property of the former USSR immediately,” said Arseniy Yatsenyuk.

The issue of the distribution of assets of the former USSR between Ukraine and Russia currently remains open, although it was first raised after the fall of the USSR. Back in 1991 Russia suggested the so-called “Zero-Variant”. The general idea thereof is the following. Russia becomes liable for all USSR debts while Ukraine refuses from its demands for its part of USSR assets. To make it clear, the USSR assets included financial assets (debts of other states to USSR), fixed assets (banks and embassies abroad, property of joint ventures) and gold, diamond and copper stock. Meanwhile, in 1991 the state debt of the former USSR amounted to 67,9 billion US Dollars.

Russia both signed and ratified the Agreement and, thus, repaid all the debts of the former USSR. Meanwhile, Ukraine signed but has not ratified the Agreement. On February 19, 1997, Verkhovna Rada of Ukraine adopted a decision stipulating that the ratification of the Agreement is postponed and is subject to the fulfilment of the following conditions by Russia, namely, providing comprehensive information on the composition and the market value of the foreign property of the former USSR (confirmed by international audit), on the gold and diamond reserves, on the volume of debts of the USSR’s debtors; repayment of debts of the bank Zovnisheconombank to natural persons and legal entities; signature and entry into force of several agreements (in particular, on return of cultural values being the cultural, national and historical heritage of the people of Ukraine to Ukraine; on assessment and distribution of diamond and gold reserves), and the complete implementation by Russia of a free trade zone with Ukraine. The conditions have not been met.

To sum up, Russia has not met the abovementioned conditions and as a consequence Ukraine has not ratified the Agreement, i.e. it has not entered into force. This means that Russia has misappropriated the Ukrainian part of the assets of the former USSR and currently owns them illegally.