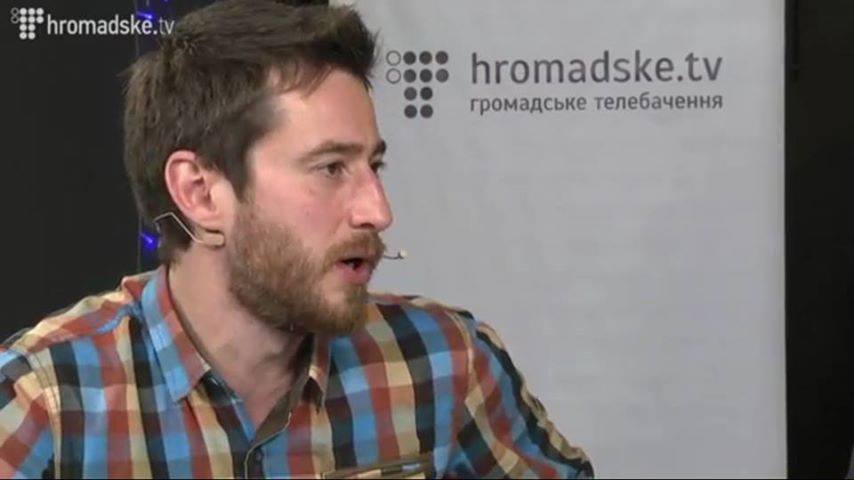 “In short, Panteleymonov got beat up because of me. It turned out to be an anecdotal story after we looked into it. So, the whole truth about yesterday’s incident at NTCU, that Miroshnichenko and Co. were watching First National Channel, which in turn was broadcasting Hromadske TV; the releasing editor of which yesterday was yours truly. At the end of production we had a slight mishap: our guest (Oleh Rybachuk) got stuck in a traffic jam and was late. To make up time I asked to turn on the concert broadcast from Red Square in ‘dear old Moscow’ — and we broadcasted this hogwash for 5 minutes — then the ironic comment of Anya Babynets came in and we continued with our telecast. But Svoboda seems to have turned on the TV in just these 5 minutes, just in time to see Valeriya [Russian pop singer] wailing some sort of ‘imperialistic ode’ next to Lenin’s mausoleum and the logo of First National Channel at the top of the screen. Naturally, they freaked out – and the people’s avengers flew at NTCU to deal with Panteleymonov. So that’s the story. Not that it justifies those ‘Svoboda’ members, but at least it shows some logic in this macabre adventure”.

On Tuesday, March 18, MP’s from the ‘Svoboda’ party forced the acting director of The Ukrainian National Television Company Oleksandr Panteleymonov to resign. A video posted on the internet shows that the MPs forced Panteleymonov to resign and that they slapped his face and on the head. These actions were condemned by the Prime Minister Yatsenyuk, acting Interior Minister Avakov, as well as ‘Svoboda’ leader Tyahnybok. The General Prosecutor has vowed to objectively assess the actions of Svoboda at NTCU. While the Ukrainian State Committee for Television and Radio Broadcasting has issued a statement on March 19 urging politicians and activists against wrongful interference in media.