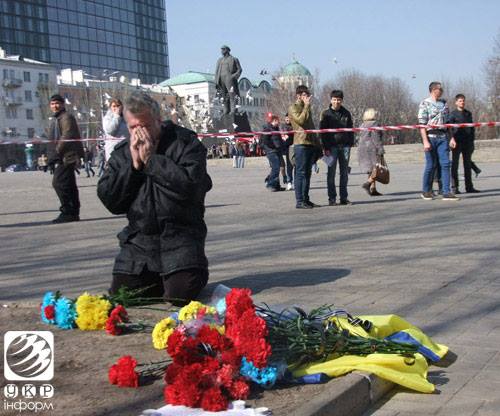 While discussion is raised around the recent resignation that ‘Svoboda’ members forced out of acting director of the Ukrainian National Television Company, Oleksandr Panteleymonov, on March 18, concerns were being raised that real atrocities will be overlooked in all the hubbub. Nadiya Palyvoda wrote in Facebook:

“Tell me quickly: what is the name of that man, ‘Svoboda’s’ press-secretary, that was killed a few days ago in Donetsk? Nobody remembers? Where are the mournful reposts, the poems? What about the last names of those two soldiers that were shot dead in Simferopol?”

Natalia wanted to find out information about them on Facebook, but the main issue of the day is “how Miroshnichenko hit Panteleymonov a bit on his head and said:

“write a resignation letter, bitch! — the same Panteleymonov whose blatant lies in live broadcasts made it possible for Ukrainians to view other Ukrainians as villains and now are killing them in the middle of the street with the bystanders shouting “Did you get enough, you fascist animal?”. Yes, we should feel so sorry for Pantalonov.

PS: the young man’s name was Dmytro Cherniavskiy. He was 22 years old. “He was harmless, a little shy, not a fighter, not a radical. Today his mom was waiting for him to come home, but he didn’t come. He was slaughtered by some ape, some mercenary or an idiot brainwashed by provocateurs. Just because Dmytro came to a demonstration for the unity of his country; a peaceful demonstration.”

Natalia also noted that she did not support Miroshnichenko’s actions in this situation, but was surprised how much people were concerned about Russian propaganda receiving a good spot. “They shout: “Oh dear, this will be shown on Russian TV, and Kiselyov [a Russian showman notorious for his misrepresentation of Ukrainian events] will say that we are fascists!”

On Tuesday, March 18, MP’s from the ‘Svoboda’ party forced acting director of the Ukrainian National Television Company Oleksandr Panteleimonov to resign. A video posted on the internet shows that deputies forced Panteleimonov to resign and that they hit him on the face and head. These actions were condemned by Prime Minister Yatsenyuk, acting Interior Minister Avakov, as well as ‘Svoboda’ leader Tyahnybok. The General Prosecutor has vowed to objectively assess actions of Svoboda at NTCU. While the Ukrainian State Committee for TV, Radio Broadcasting has issued a statement on March 19 urging politicians, activists against wrongful interference in media. Amnesty International and OSCE have issued statements condemning the incident.