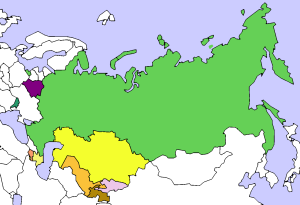 Ukraine this year will no longer preside over the Comonwealth of Independent States. The Ministry of Foreign Affairs made the announcement through its Director of Information, Yevhen Perebyinis, at a briefing in Kyiv. “The Ukrainian side has decided not to extend its presidency in the CIS in 2014,” he said. Furthermore, “Ukraine has the right to reconsider its continued participation in the CIS. This issue is being considered,” said Perebyinis.

According to him, the CIS, instead of implementing its main tasks has become “a tool to implement the interests of individual members of the FSR, in particular Russia.”

Perebyinis said that during the situation in Crimea, Ukraine insisted on the CIS making a resolution that condemns aggression. As such, Kyiv is pulling out because the CIS is based on the principles of respect for sovereignty and the inviolability of borders. “Unfortunately, recent events have shown the opposite,” said the diplomat.

Ukraine has begun to log out of the Commonwealth of Independent States. The decision was made at the latest meeting of the National Security and Defense Council of Ukraine (NSDCU). NSDCU Secretary Andriy Parubiy announced it at a press briefing on Wednesday evening on March, 19.

“It was decided not only to stop the presidency in the CIS, but also to begin the process of withdrawal from the CIS,” said Parubiy.

Although Ukraine was one of the founders of the CIS as a result of signing the Bieloviezha agreement in 1991, it has not ratified the CIS Charter, so de jure, it is not a member of the Commonwealth of Independent States.

1 thought on “Ukraine refuses to preside over and exits CIS”