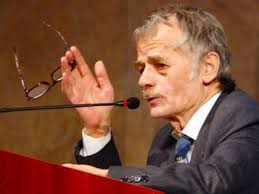 Former prime minister Yevhen Marchuk is proposing that Mustafa Dzhemilev, leader of the Crimean Tatars, be nominated for the Nobel Peace Prize, reports the publication Den.  Marchuk shared his views during his presentation “Lessons for Ukraine” at the conference “Challenges of the times: an expert opinion,” held at the Kyiv International Institute of Management on March 23.

Marchuk , who had played a key role in resolving two Crimean crises in the early 90s, says he presented his proposal to representatives of the Ukrainian government at a recent meeting of specialists, where Yulia Tymoshenko was also present.

“Yesterday I proposed that we nominate Mustafa Dzhemilev for the Nobel Peace prize. That would be just. The reasons are numerous. He is a former prisoner of Stalin’s camps and a representative of the Crimean Tatar nation, who firmly maintains his position on the preservation of Ukraine’s sovereignty and who is actively seeking options for a peaceful settlement of the conflict in Crimea,” Marchuk concluded.

2 thoughts on “Mustafa Dzhemilev recommended for the Nobel Peace Prize”