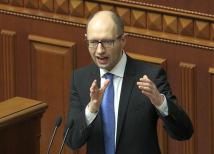 The total amount of Ukraine’s debt has reached 53 % of GDP, or UAH 800bn, Prime Minister Yatsenyuk stated in the Verkhovna Rada on Tuesday.

“Over the last month we have held the foreign reserves intact,” Yatsenyuk said. “USD 20bn was burned while withdrawing funds abroad and maintaining a fictitious stability in the country, including the maintenance of the exchange rate,” he said.

According to the Prime Minister, in 2011, the debt burden of the country was 36 % of GDP, over the past 3 years of external and internal debt of Ukraine has increased by half, up to USD 37bn. “The total amount of debt today exceeds UAH 800bn,” he says.

Yatsenyuk noted that, EU requirements mandate that the amount of debt does not exceed 60 % of GDP, while Ukraine has approached this critical threshold (53%).

The original news in Ukrainian is on the Ukrainska Pravda website: