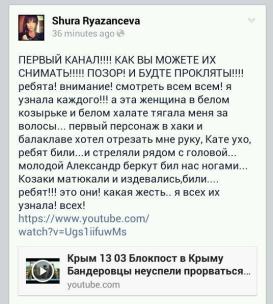 Alexandra (nickname Shura) Ryazanceva, a Maidan activist from Yalta, Crimea, was returning home from the mainland with fellow activists and journalists when their cars were stopped at a checkpoint blockade set up by Crimean “self-defense forces” and Berkut soldiers.  After finding a Ukrainian flag in the trunk of her car and a tattoo on Ryazanceva’s forearm honoring the “Heaven’s Hundred” (fallen heroes of the Maidan), the “self-defense” and Berkut soldiers became enraged.  The activists and journalists were subjected to physical and psychological torture (beaten, kicked, dragged by the hair, guns fired close to their heads, threatened with maiming and killing), and held captive, first in Armyansk and then in a military base in Sevastopol. They were released on March 11.  Ryazanceva was appalled to recognizes her torturers in video footage shown on March 13 on Russian Channel 1 news, which reported that the checkpoint forces had repelled a supposed “banderite” attack on Crimea. Ryazanceva recounts some of the specifics of her abuse in her post.

CHANNEL 1!!!! HOW CAN YOU FILM THEM!!!!! SHAME! AND DAMN YOU!!!!  People!  attention!  Everyone everyone should watch this!  I recognize each one!!! That woman in the white cap and the white jacket dragged me by the hair… the first personage in khaki and balaclava wanted to cut off my hand, Katia’s ear, they beat the boys…and fired [their guns] right next to our heads…young Alexander the Berkut kicked us repeatedly…. The Cossacks swore and mocked us, beat us…kids!!!  It’s them!  What horror.. I recognized them all! all of them!