We well know that the World Wide Web has been used for a long time as a tool to manipulate public opinion, as has been demonstrated in the past with the invasion of Iraq in 2003. But never before has the manipulation reached such a level as the Kremlin has taken it to for the past few years.

The Saint Petersburg Times describes how they uncovered a troll operation aimed at political opponents and American politics, culture, and way of life.Local reporters infiltrated a covert organisation hiring people to blog and attack opponentsThese Internet agencies are numerous, and a journalist talked to one coordinator who explained with an example of the the work they do.

Navalny is the Hitler of our timeMost of the sites with a large number of members see these trolls appearing in blogs and forums.

One of our contributors, a firearms expert who helped identify firearms used on Maidan and who is a member of a world-famous site for anything related to shooting, Accurate Reloading, has been keeping the other site members informed about the situation in Ukraine since last December, when he started a thread in the forum for politics. The first trolls immediately appeared in the #РуссоФашисто Ukraine. Breaking news. discussion thread, and attacks began immediately. Since all information was verified before being posted, more viewers came to read, and the trolls were unable to sully the author’s name, as he is well known for his expertise in this community. The Gremlins changed their modus operandi and opened 55 other threads related to Ukraine, where they spread RT and other Russian ‘news’ propaganda. They tried unsuccessfully to divert readers from the main thread. A few days ago, new trolls appeared, using the usual suspects’ modus operandi of not answering or addressing the issue under discussion, but repeating the official Kremlin propaganda ad nauseam while some of their supporters were carrying on the old method of spamming the board with multiple threads opened daily.Some of the IP’s routes were traced back and surprisingly, but not very much so, one of the routes traced back indicated a server located inside the Kremlin. Here is the evidence that the head of disinformation campaign resides in the Kremlin.See the screen capture. 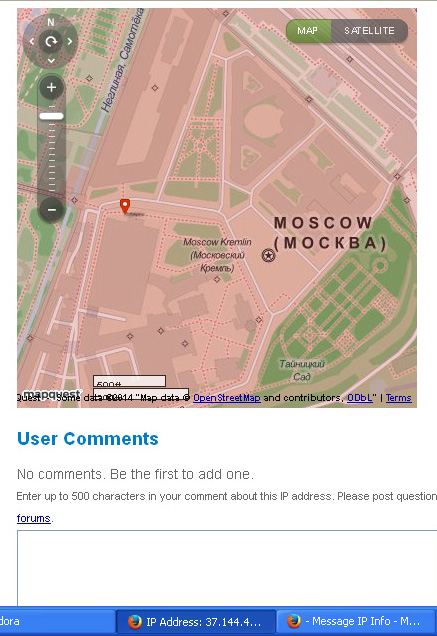