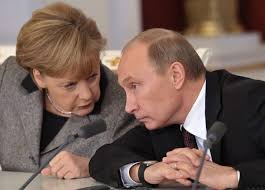 Russian President Vladimir Putin has informed German Chancellor Angela Merkel about a decision to  partially withdraw of Russian troops from the eastern border of Ukraine.

Such results of their telephone conversation have been reported by Merkel’s Press Secretary Stefan Siebert.

According to the statement posted on the website of the German government, “today Merkel and Putin have spoken on the telephone again. The Russian President has informed the Chancellor about the partial withdrawal of Russian troops from the eastern border of Ukraine by his command.” Based on obtained information, the parties have discussed further possible steps to stabilize the situation in Ukraine and Transdnistria and agreed to continue their close relations.

Earlier, the Kremlin Press Service has reported that during their telephone conversation Putin and Merkel have discussed “various aspects of the situation in Ukraine, particularly the possibility of international assistance in regaining stability.”

“Putin has also emphasized the importance of implementing a constitutional reform in the country, focused on ensuring the lawful interests of population in all Ukrainian regions,” the statement notes.