The Canada & Ukraine Together/Razom benefit concert held on March 28th at the Mississauga Living Arts Centre near Toronto, Ontario was one of those rare events where everything fell into place so phenomenally that God’s hand seemed to be at work.

Incredibly, the gala concert was organized in just over three week. Ticket sales were so brisk that the event set a single-day ticket-sales record at the Centre’s Hammersmith Hall, which seats more than 1,300.

The concert was organized to support the families of those who perished and those who were seriously injured on the Maidan, the independence square in Kyiv, and elsewhere in Ukraine earlier this year. These fallen heroes were among the peaceful protesters seeking a corruption-free political system and an accountable government. Many of these heroes were shot in February by snipers under the orders of the Russian-backed regime of then-president Victor Yanukovych.  The concert was perfectly timed as it took place on the weekend that the 40t-day “panakhyda,” the traditional religious service for the repose of departed souls, was taking place in Ukraine.

An impressive line-up of performers was assembled.  The musicians from Ukraine – all who had performed on the Maidan – included Maria Burmaka, Taras Chubai, Serhiy “Foma” Fomenko and Mariana Sadovska. Kyiv-trained, but Canadian-based violinist Vasyl Popadiukmade an appearance as did Canadian jazz duo pianist Joe Sealy and singer/actress Jackie Richardson and comedic actress Luba Goy. Canadian groups included the Canadian Bandurist Capella, under the artistic direction of Andrij Dmitrovich, the Hamilton Children’s Choir, led by Zamfira Poloz, and the Lemon BucketOrkestra, headed by Canadian-born Mark Marczyk, who recently spent a month on the Maidan in Kyiv.

Enlisting Andrey Tarasiuk as the director/producer for the concert was a stroke of genius. Tarasiuk, currently with Toronto’s Pleides Theatre, has been associated with almost every major theatre in Canada, including the renowned Stratford Theatre Festival.  He brought his wealth of experience to produce a unified show with five segments that thematically reflected the key principles exemplified by the Maidan: struggle, sacrifice, freedom, hope and responsibility. Each segment was introduced by a different narrator who spoke on how the theme related to recent events in Ukraine, starting with investigative journalist Victor Malarek, followed by stage and television actress Mimi Kuzyk (a former dancer with Winnipeg’s Rusalka Ukrainian dance group), Tony-Award winning actor Brent Carver and Academy Award nominated actor Graham Greene.

The musical numbers and the stage lighting corresponded to the theme, as did the images, including scenes from the Maidan filmed by Bablyon 13 and others, which were projected on the screen that served as a giant backdrop.  The sacrifice segment opened with the haunting sound of Mariana Sadovska’s singing, accompanied by the Indian Harmonium, of the song, “Hey Pleve Kacha,” about dying in a foreign land.  The Canadian Bandurist Capella sang ballads expressing Ukraine’s historic struggles and sacrifices.  The raucous performance of the Lemon Bucket Orkestra reflected freedom, while the Hamilton Children’s Choir sang of hope.

Ron Chyczij, the chair of the concert organizing committee and the driving force behind the event, introduced the final segment and the guest of honour, Dr. Olha Bohomolets, the chief medical officer of the Maidan.  She appeared via video, yet her address was possibly even more moving than a personal appearance might have been.  The large screen enabled everyone to see the anguish in her face as she recalled the shootings of innocent Ukrainians and the death of a 19-year student, Roman, and his parent’s resolve to keep fighting the battle. She asked Canadians to press for an independent investigation into the shootings.  And, she concluded by expressing her vision for an “international solidarity” of Ukrainians, who not only fight for a better life in Ukraine, but actually live to enjoy it.

The two-and-a-half hour show received a standing ovation and ended with all the performers on stage singing the Ukrainian national anthem. 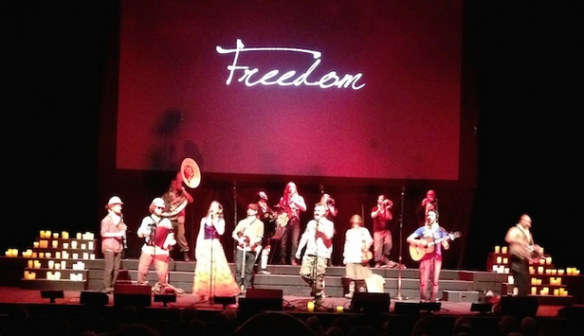 At the exits, all in attendance were handed a beeswax candle, a sobering reminder of those who were being honoured.  It was a reminder, too, that though the evening had come together fabulously as if by divine intervention, with more than 100 Maidan protesters still missing in action, with Russian troops still amassing on Ukraine’s border and an upcoming election in Ukraine, there will still be a lot of work – and praying—ahead.