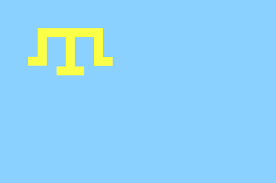 Residents of the Simferopol district Ak-Mechet gathered to protest the beating of a 14-year-old Tatar boy who, according to his parents, was beaten for using his native Crimean Tatar language while on the phone, reported BBC Ukraine. The incident occurred on March 31, at around 17:00, when the boy was returning from school. However, circumstances of the beating became more widely know only after the neighborhood meeting on Wednesday, April 9.

The boy’s mother, Asiye Muzhdabayeva, told journalists from the ATR TV channel that her son is still traumatized and does not wish to talk to the press. She says he was attacked by two strangers who first insulted him because of his nationality.

“They said that Crimea is Russia and that Crimean Tatars don’t belong here. ‘You should all be thrown out,'” they said. “When my son answered that they need to watch their language, they hit him and knocked him down,” she explained.

The boy had surgery for a broken nose and was discharged on April 7. The parents reported the incident to police. The residents of the neighborhood are outraged and demand that the police find and punish the attackers.

A spokesperson for the so-called “Crimean Police” Olha Kondrashova said she didn’t know anything about the incident but promised to provide accurate information later.