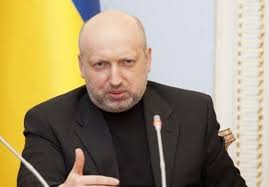 Address of the Acting President of Ukraine, Head of the Verkhovna Rada of Ukraine Oleksandr Turchynov to the People of Ukraine

Today is a great Christian holiday — the day of our Lord’s entry into Jerusalem. When he entered the city, all greeted him with “Hosannas” and threw clothing and palm branches under his feet. And in a few days, these same people demanded his crucifixion.

Unfortunately, today this celebration is marred by aggression and blood. One day ago, coordinated terrorist troops of the Russian Federation seized control of police and other administrative buildings in several cities of the Donetsk Oblast.

This event was especially dangerous in the city of Slovyansk, where professionally trained criminals dressed in Russian camouflage and armed with Russian automatic weapons did their work.

This morning they fired automatic weapons on the column of law enforcement units that were responsible for defending citizens on this festive Sunday. These criminals let out a barrage of fire while hiding behind a living shield of local residents, who had been deceived by Russian propaganda.

The blood of Ukrainian heroes was shed for our land, for our one and only, sovereign, indivisible Ukraine.

Blood was shed in a war conducted against Ukraine by the Russian Federation. The aggressor does not stop and continues to organize unrest in the East of our country.

This is not a war between Ukrainians. This is an artificially created confrontation designed to weaken and destroy Ukraine itself. Eventually, however, it will weaken our enemies. Russia today is condemned by the entire civilized world. We have done everything to avoid casualties, but we are prepared to resist all attempts at invasion, destabilization, and armed terrorist attacks.

The National Security and Defense Council of Ukraine has decided to launch a large-scale anti-terrorist operation jointly with the Armed Forces of Ukraine. We will not allow Russia to repeat the Crimean scenario in the eastern regions of Ukraine.

Those who have not fired on our security forces and who agree to put down their arms and vacate administrative buildings by Monday morning, will be amnestied. I have signed a decree to give guarantees against the implementation of appropriate punishment for past actions.

We are ready to consider granting significant empowerment to the regions and to implement broad reforms for greater local self-government as well as the renewal of local government.

However, anyone who engages in armed struggle against our country in support of the aggressors will not escape punishment and responsibility.

I appeal to all fellow citizens in the East of our country. Do not become tools in a cynical and foreign war against your own country. Do not support those who wish to destroy peace and tranquility and who are thrusting your region into the abyss of economic catastrophe, the abyss of civil conflict.

I appeal to those who want to protect Ukraine. It is essential not to destabilize the situation in Ukraine and not to collaborate with the enemy and his agents, whose sole purpose is to disrupt the elections, to overthrow the government, and to create chaos and lawlessness.

I appeal to every Ukrainian. In the face of foreign aggression, we must unite. We must all do everything possible so that we put an end to the panic and stop dragging society into civil conflict. Only together, certain of each other’s support, will we overcome all our current problems. I believe that will happen.

May God bless Ukraine and each one of us.