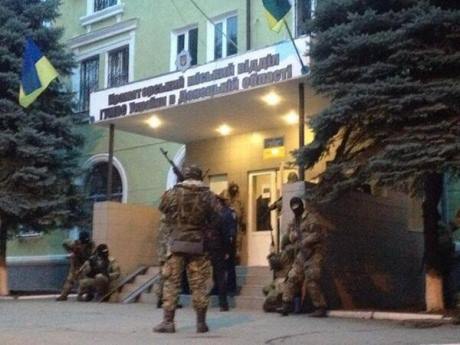 Today, on April 12 the Russian Federation, in fact, invaded continental Ukraine.
This was recognized by the Interior Minister of Ukraine, military experts and numerous witnesses of the latest events in Eastern Ukraine. National Security and Defense Council of Ukraine was urgently convened.

“The Government of Ukraine is considering the facts of today as display external Russian aggression,” Minister of Internal Affairs of Ukraine Arseniy Avakov wrote on his page. The reason for such a statement is that the weapons used by militants in Krasny Liman (Donetsk Oblast) special series of Kalashnikov guns with grenade launchers – is owned only by armed forces of Russian Federation. Some activists in Sloviansk (Donetsk Oblast) managed to capture the photo of a “green man” with weapon whose uniform looks just the same as we’ve seen in Crimea. In Sloviansk also the towers of mobile connection were destroyed, police station and Security Bureau office are blocked. Two journalists were caught by armed people, but later they were released. And the most worrying fact: the weapon storage room in Sloviansk was raided and, as a result, a large number of firearms were handed over to random people. 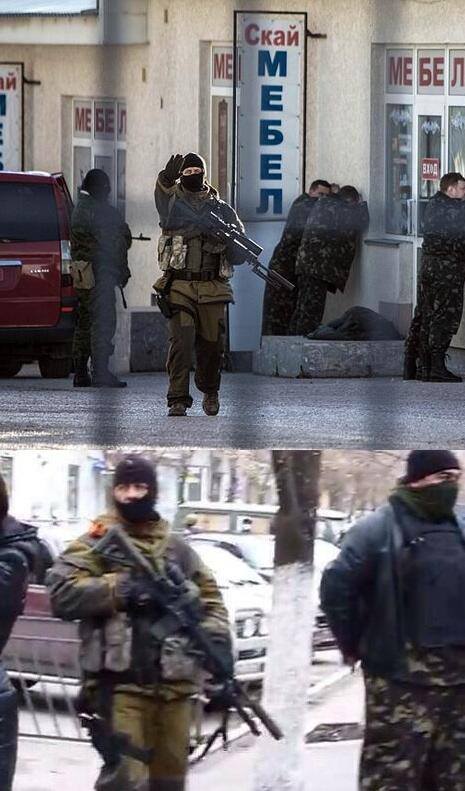 Currently, some of the buildings of the police and Security Service offices in the East are under the control of “pro-russian activists” – in fact, heavily armed and seemingly well trained militants. According to some witnesses, on the roads checkpoints with armored personnel carriers and gunmen were set up with gunmen beating and detaining people or destroying cars. This is happening as far from the Eastern borders as in Poltava region.

Unfortunately, police in the East is largely not under the control of the central government, it is managed by the occupier.

Meanwhile separatists in Crimea announced the creation of “Ukrainian Federation”, which will join the Union State of Belarus and Russia and which should include Ukrainian cities – Luhansk, Kharkiv, Donetsk, Dnipropetrovsk, Zaporizhia, Kherson, Mykolaiv and Odesa. This was written by a self proclaimed Deputy Prime Minister of Crimea Temirhaliyev. He wrote that it will be “The liberation of South Eastern Ukraine”. The meaning of these words is quite clear for us: the occupation of continental Ukraine by Russia has started!

Source: EuromaidanSOS. The group asks to spread this information as widely as possible