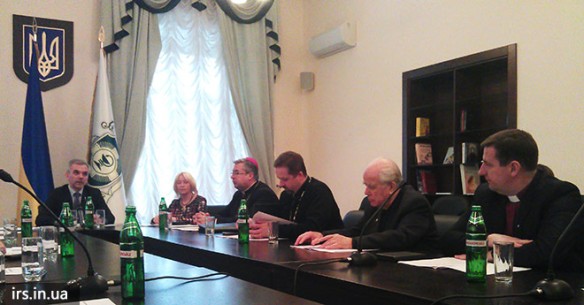 KYIV – “Health, Church, and society have always gone together. Morally sick society requires our joint efforts: doctors who treat the body, and priests who heal the soul,” claimed recently appointed head of the Ministry of Health Oleh Musiy.

The meeting of the Ministry’s leadership with the heads and representatives of religions was dedicated to the resumption of cooperation between the Ministry of Health of Ukraine and the Ukrainian Council of Churches, and was held on April 11th, 2014, the Institute for Religious Freedom reported.

“I see our collaboration as open, fair, and equal. I am convinced that this cooperation will benefit the Ukrainian people. We have a common humanitarian mission. Together we will be able to succeed in building a society defined by moral and ethical principles, and the fulfillment of professional codes of ethics, particularly the code of medical professionals –it is obligatory,” said Minister Oleh Musiy.

The members of the All-Ukrainian Council completely supported the position of the head of the Ministry of Health on thenecessity of banning the advertising of alcohol and tobacco products in order to avoid encouraging children and youth to use them.

The representative of the Chairmen of the UOC UCCRO Bishop Klyment (Vecherya) drew attention to the contradictory ways of preventing HIV/AIDS which have been recently practiced in the state. He noted that emphasis should be placed primarily on preserving family values, premarital abstinence, and conjugal faithfulness.

“A nation which kills its own children goes to extermination,” claimed Archbishop Petro Malchukduring the meeting, thereby raising the issue of widespread abortions in Ukraine. The hierarch delivered concrete proposals to the Ministry of Health aimed at supporting each pregnancy. He also mentioned the problem of euthanasia and the necessity of state support for hospices and other palliative care facilities, which are being created by churches on their own initiative and at believers’ expense.

In turn, the minister agreed with the thesis that the government’s vocation is “to protect every human life, from the moment of conception to the natural physiological death.” According to Oleh Musiy, the government can provide organizational support for the establishment of hospices.

The chairman of the Council for Cooperation with UCCRO, academician Yuriy Kundiev, noted that bioethics should be given due attention. He urged the development of mechanisms for implementing the Physician’s Code of Ethics, which was approved a few years ago, and called unacceptable the previous leadership’s decision to liquidate the Committee on Bioethics at the Ministry of Health. “We have gone endured a hard offensive not only on bioethics and the humanization of medicine, but on ethics in general,” noted the academician.

Deputy Chairman of the Council, Ukrainian Greek Catholic Church priest Andriy Nagirnyak, stressed the importance of establishing a permanent bilateral dialogue between the Ministry of Health and the Council of Churches. “Obviously, the positions of the medical and religious communities do not always coincide; however, we can find understanding in dialogue, particularly on the issues of replacement therapy, reproductive technologies, surrogate motherhood, and so on,” noted the priest.

He believes that the role of a priest has for a long time been relegated to the level of funeral services for the deceased in hospitals, but the potential of the churches is much larger. “Priests can provide important spiritual and moral support to the patient throughout the process of treatment, thereby making it more effective, which research confirms,” concluded Andriy Nagirnyak.

Pastor of the Pentecostal Church Union of Ukraine Rustam Fatullaev thanked Minister Oleh Musiy for his personal example in the struggle for every life, which he showed during the recent events on the Kyiv Maidan, managing a group of medical volunteers. “Keep on struggling for the life of every person and government service, like the churches do in their daily ministry,” wished the pastor.

The meeting participants agreed to finalize a cooperation agreement and provisions for the Social Council to delegate in its membership new representatives of churches and religious organizations, and to designate those responsible for cooperation from the side of the Ministry of Health.