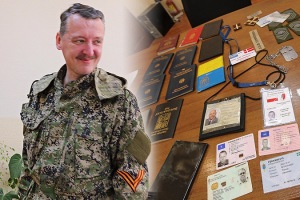 The Security Service of Ukraine (SBU) has determined the real name of the officer of Russia’s Central Intelligence Agency who operated in Ukraine under the name Igor Strelkov, according to the SBU spokesperson Marina Ostapenko.

Ostapenko said that the real name of Igor Strelkov is Igor Vsevolod Girkin. He is a citizen of the Russian Federation, and a colonel, born on December 17, 1970.  His  Russian Federation passport: № 4506460961, was registered in Moscow under the address of Shenkursky Ave. 8B, Apt. 136.

Ostapenko said that Girkin had previously visited Ukraine numerous times with a Russian passport and the last time legally crossed the Ukrainian border on February 26, 2014 , arriving on a flight from the Sheremetyevo (Russia) to Simferopol (Crimea).  She recalled that it was on the night of February 26 to 27 that the Verkhovna Rada (Parliament) of Crimea was occupied.

“It has also been ascertained that the group of Stelkov was involved in the kidnapping of the OSCE observers in the Donetsk region. They were apprehended under the direct command of the saboteur Igor Byezlyera (nicknamed Byes),” said Ostapenko.  Recordings of telephone conversations between Byezlyera and subordinates provide evidence of this,” she said, demonstrating the audio recordings of this conversation.

The SBU reminded that they have announced a search for Girkin (Strelkov) and have launched criminal proceedings on charges of involvement in organizing deliberate murders and committing acts detrimental to the sovereignty of Ukraine, conducting sabotage and subversive activities, and organizing mass riots in the eastern regions of Ukraine.

It has been reported that Sloviansk separatists captured the team of inspectors of Organization for Security and Cooperation in Europe (OSCE) working in Ukraine in accordance with the decision of the OSCE Vienna Document of 2011 on confidence-building measures and security.

The group of eight individuals included four representatives of Germany and one each from Sweden, Poland, the Czech Republic and Denmark. Later the military observer from Sweden Yngwie Thomas Johansson was released.