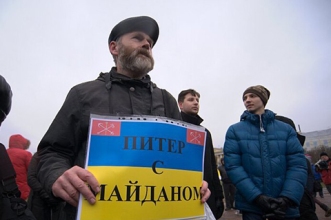 The war undertaken by the Russian Federation against Ukraine has brought a whole set of difficulties and “paper” misunderstandings not only for the residents of the annexed Crimean peninsula, but for Russians residing in Ukraine as well.

While the Russian Federation is issuing passports left and right, owners of those passports who do not want to return under the control of Putin are desperate.

Moskvich Mikhail (or Mykhaylo, as the young man laughingly points out, since that is the name recorded on the marriage certificate signed in Kyiv) came to Ukraine to join his love. He works in the IT sector, has an official job in Ukraine’s capital — rare for Russians, since employing a foreigner is fairly complicated in Ukraine — and therefore has a good chance of getting a residence permit in Ukraine. A temporary one at first. He’ll be able to obtain a permanent one after two years of marriage if the laws do not change.

“All the Russians who don’t have residence permits have problems,” he explains. “Previously, work permits obtained from employers guaranteed the receipt of a residence permit. However, not all people are formally employed,” he says.

However, Mikhail points out, he and his Russian friends recently crossed the Russian-Ukrainian border without much difficulty. “On trains they stop a lot of people,” he admits. “But you can fly. If your documents are in order, they let you through without a problem. On previous week-ends I flew to Moscow and took my marriage license and passport for documentation. Nobody bothered me. The main thing is to fly,” he says emphatically. “Because trains, cars, and buses guarantee failure.”

Quite a few of his friends have been living in Ukraine according to a different system.”In the past you could leave once every three months and not worry about it. Now it’s complicated for the guys,” he says. “On the other hand, it’s probably a good thing if it cuts down on the number of ‘professional revolutionaries’ going to Eastern Ukraine. The measures are tough but just.”

Based on his own experience, Mikhail suggests that Russians who want to continue living in Ukraine should try to get a residence permit if they have family or official work reasons. He recommends using lawyers. They cost more but the process is faster, he says.
“You can even try to ask for political asylum … Say that in your homeland you’re being persecuted for marrying a Ukrainian, for instance. All joking aside, these themes are out there in Russia. Quite a few of my former friends are becoming completely hysterical that I’m a damned fascist now and an agent of the State Department,” Mikhail admits. “A very large percent of the population has been completely brainwashed.”

Ivan hails from Saint Petersburg. “I live in Lviv with my wife,” he says. “She’s from the Lviv area. I’m learning Ukrainian little by little. I still can’t communicate fully. I make mistakes and can’t express my thoughts quickly. This is why I mostly speak Russian. However, this has never caused me any problems. I’m convinced this topic is being overblown artificially.”

However he has other problems. “I used to be able to deal with the relative complexity of living in Ukraine as a citizen of the Russian Federation simply by leaving and returning. For me it was convenient,” he explains. “It took only 18 hours every three months. I didn’t even think of other ways of staying in the country since I don’t like various bureaucratic procedures. Yes, I’m married to a citizen of Ukraine, but at this stage it still doesn’t give me any advantages. More specifically, I recently found out that theoretically it gives me the possibility of getting a temporary residence permit. But when I learned about it there wasn’t enough time to prepare the documents before the next required departure. The new law restricting entry to Ukraine had already been adopted.”

In addition, he is simply afraid to go back to Russia. “I supported Maidan. I went to Kyiv,” he says. “I constantly try to explain what is really happening in Ukraine to my friends and acquaintances in Russia. As far as the current politics in the Russian Federation, my position has always been extremely negative. And this is one more reason for my reluctance to go back there. I have reasons to be sincerely afraid of being persecuted by certain government agencies….”

Competent authorities suggest the young man should try to get a temporary residence permit. After all, his marriage certificate gives him unquestionable rights — the right to family reunification.

Ivan probably will do that. But he admits he really would like to just get Ukrainian citizenship and stay here forever without the constant red tape. But how? Ask for political asylum? The State Migration Service states there are almost no provisions for requesting political asylum in Ukraine. Instead, there is refugee status. Normally the people requesting this status are from distant countries in a state of war. “This has never really been the case for Russians,” the migration service says.

Who knows. Perhaps that is the situation now.

Translated and edited by Anna Mostovych