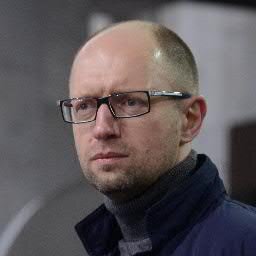 The Prime Minister of Ukraine Arseniy Yatsenyuk considers the statements on Ukraine made on May 7 by the President of the Russian Federation Vladimir Putin  suspicious and a possible prelude to new provocations by Moscow. Yatsenyuk expresses his views during an interview on channel 5 Thursday evening, May 8, as reported by Ukrainska Pravda.

“Vladimir Putin’s statement alarmed me…It gave me a sense of foreboding, They say one thing and do something else. After this statement I asked our law enforcement to strengthen security for May 9, Yatsenyuk said.

The Prime Minister believes that Russians are preparing sabotage and provocations in Ukraine during the holidays. “Right now they’re engaged in some game. They gave instructions to schedule the referendum, and now they’re pretending to want to reschedule it. They’re even willing for the May 25 elections to take place,” he said.

“They’re supposedly interested in contributing to the stability of Ukraine. Well, they’re contributing every day — they’re financing terrorists engaged in anti-Ukrainian propaganda…And this continues after these peaceful pronouncements about how much they’re interested in deescalating the situation in Ukraine and about what will happen in Ukraine,” he explained.

They (the Russians) will say: see, as the Russian government, we encouraged all parties to embrace peace. After all, we contacted them and said that we support peace and stability in Ukraine and it is the Ukrainian government that is to blame for the failure of the Geneva agreements and it is to blame for some clash, which they are definitely planning for May 9. There is no doubt about that,” Yatsenyuk said.

“And everyone will be showing these scenes on Russian television, scenes where enraged nationalists are beating veterans. This is Russian propaganda. Therefore, this is why (Putin’s) statement really alarmed me, ” Yatsenyuk said.

Commenting on the possible visit of Putin and Prime Minister of the Russian Federation Dmitry Medvedev to Crimea on May 9, Yatsenyuk emphasized that he considers the move a provocation.

“It’s the presence of a foreign president on the territory of the Ukrainian state, since Crimea is a territory of Ukraine,” said Yatsenyuk.

As previously reported, Putin on Wednesday, May 7, after talks with the President of Switzerland and the chairman of the OSCE Didier Burkhalter, called elections in Ukraine a “move in the right direction.”

He also urged separatists to postpone the “referendum” in Donetsk and Luhansk scheduled for May 11.