Earlier today, two men died and one man was injured as a result of a conflict and shootout between Krasnoarmiysk citizens and men in camouflage who called themselves the Dnipro Battalion.

Borys Filatov, Deputy Chairman of Dnipropetrovsk Oblast Administration, commented on the shootout in Krasnoarmiysk on his Facebook page.

“Even the patriotic internet and mass media are full of nonsense.

There’s NO Dnipro battalion that belongs to the National Guard.

There’s the National Guard. There’s the Dnipro battalion of the MIA (Ministry of Internal Affairs of Ukraine). There’s territorial defense.

Dnipro battalion wasn’t in Krasnoarmiysk. They’re helping the military set up the checkpoints. That’s it.

You can draw your own conclusions.” 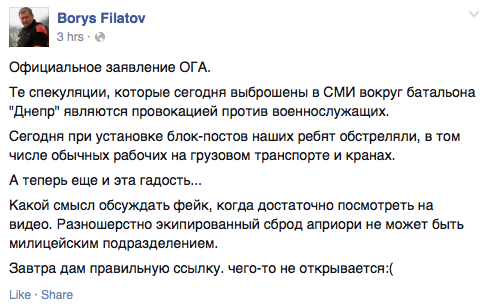 The speculations about the Dnipro battalion that were thrown around in mass media today are provocations against the military.

While setting up the checkpoints today, our guys were shot at, including the simple workers on freight transport and cranes.

And now this filth…

What’s the point of discussing this fake when you can just watch the video. A rabble with mismatched equipment cannot a priori belong to a police unit.

I’ll provide you with a correct link tomorrow, it won’t open :(“