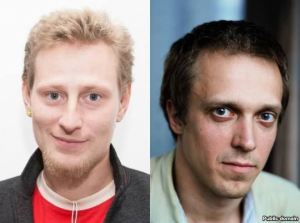 Kyiv — It has been more than three weeks that separatists have been holding theater director Pavlo Yurov and cultural volunteer Denys Hryshchuk. Friends and family of the artists say the kidnappers have not made any demands and have called the hostages “prisoners of war.” Law enforcement says the case needs to be publicized as widely as possible because that is at least one way to ensure the safety of the captives.

Pavlo Yurov and Denys Hryshchuk arrived in Slovyansk on April 25, after spending several days in Donetsk, says Anastasia Kasylova, a friend of the director.

“Pavlo is from the Luhansk Oblast and Denys from Donetsk. When disturbances began in the East, Pavlo was very upset. He was convinced that people were suffering there and that the people in Kyiv do not understand them and that it was important to try to find a common language with them. This is why he wanted to go home, to see everything with his own eyes. Everybody told him it was dangerous,” she said.

Late April 25, contact with the artists was lost. The only information available is that they are alive and are being kept in the basement of the Security Services building.

“The journalists who work in Slovyansk report that the two men are being kept in normal conditions, and that they are fed and not harassed. However, there is no documentary confirmation — they will not allow them to be photographed. We tried to negotiate with the separatists for at least a phone call, but they won’t even permit that,” said Denys Hryshchuk’s wife, Kateryna Yermolayeva.

Nobody knows how long they will be held

Yermolayeva says there were no grounds for detaining the artists, since they do not belong to any party or organization. Probably the men got involved in an argument, she supposes. Or maybe the separatists found their train tickets to Kyiv, which raised suspicions, guesses Anastasiya Kasylova.

The separatists have made no demands. “We phoned the ‘People’s Mayor’ Ponovarov. He confirmed they were there and said something like ‘we are determining their degree of the guilt.’ And then nothing more. How long they’re preparing to hold them is unknown,” Kasylova said.

Relatives of the prisoners have turned to law enforcement, the European Court of Human Rights, and the OSCE. Oleh Veremiyenko, a representative of the Helskinki Group said recently that the Ukrainian government is not doing everything possible to free the prisoners. However, Andriy Didenko, the human rights representative for the group, noted that the situation is complicated by the fact that separatists are hiding behind peaceful civilians.

“These are deliberate, provocative actions. In my view, the government is taking necessary measures. However, it is difficult to assess their effectiveness, because the Security Service of Ukraine is just now being formed. In reality it had been destroyed previously,” Didenko said.

Didenko believes it is important to engage international organizations and generate publicity for these events. As previously reported, cultural figures in Russia, Poland, Germany, France, and other countries have called for the release of Pavlo Yurov and Denys Hryshchuk.