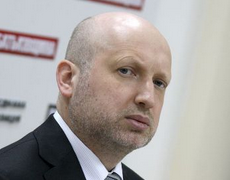 The Chairman of Verkhovna Rada, Acting President of Ukraine Oleksandr Turchynov, declared that on Thursday morning 13 Ukrainian soldiers were killed during the fight near Volnovakha near Donetsk.

“Throughout the fight to protect the town of Volnovaha from an attack and attempt to occupy by members of a separarist group). Our soldiers protected this town. They did not let the attackers advance. However, under the fire of grenade-gun and heavy automatic weapons, 13 men have tragically died for Ukraine,” Turchynov reported this at his meeting with the members of the Ukrainian Council of Churches and Religious Oranisations, that took place on Thursday in Kyiv.

According to the speaker, the members of the anti-terrorist operation are encircling and concentrating around the central part of Donetsk and Luhansk Oblasts, where the “separarist base still remains”. “They have attempted to break this encirclement and attacked the checkpoint, which is now located 48 km away from Donetsk,” explained O.Turchynov.

As reported,  the Ukrainian army’s military operation began on Thursday night in the town of Volnovaha of Donetsk oblast. According to the members of the illegal armed forces, who call themselves ‘militias’, at least 25 people were wounded.

The death of 8 members of the anti-terrorist operation and wounding of 20 other people had been previously reported.

The press-service of the Ministry of Defence stated that Ukrainian soldiers have died and received injuries near Volnovakha on Thursday night as a result of the detonation organised by members of the illegal armed forces: “During the fire, one of the charges hit the fighting machine, located at the checkpoint, which led to an explosion of ammunition”.

2 thoughts on “13 Ukrainian Soldiers Have Died During the Fight Near Volnovakha, Turchynov says”