According to the Ukrainian law enforcement, the National Guard may have several tens of thousands of soldiers. One of the battalions of this department is already participating in the anti-terrorist operation, which the Ukrainian government is carrying out in the East.

The service in the National Guard begins in one of the recruitment points spread all over the country. They are usually located near military units, where MIA workers explain the service conditions to the volunteers and provide them with the list of documents necessary for application.

Two young men are standing in line near the point in the city centre of Kyiv, they have sports bags with them. Maksym and Volodymyr had been ready to go to the training camp of the National Guard right from the recruitment point, however, they discovered, they had to first undergo sorting.

The officer accepting volunteers explains: they have to pass a medical inspection and a compulsory background check.

What is more – a rifle would not be given to anyone who has had convictions and to those who even have relatives with a criminal past. The National Guard assures that it is best to be safe than have problems in the future. 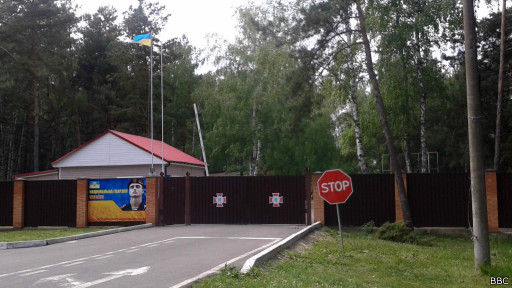 Recruitment point to the National Guard

Maksym is 25 years old, he is a dental technician by education, however he says that while he does not have a job, he decided to serve for the good of the country.

“I know how to do two things: pull out teeth and serve in the army, so the choice isn’t wide. Why simply sit at home?” Says Maksym. He assures that the salary doesn’t play a big part for him in this case. The salary of a guardsman really isn’t big – about 2000 UAH a month.

Maksym’s friend, Volodymyr, is 26 years of age, he is a lawyer by profession and recently received a job proposal. In spite of this, Volodymyr is ready to serve.

The term of deployment of the guardsmen in the conflict zone may not surpass three months. However the officer accepting applications from volunteers sincerely warns them – in the current situation three months in the East may extend to an undetermined amount of time.

“The word ‘patriotism’ has been overused at this point, however in our case, this really is what we are talking about. Everything that is happening there now (in the south and east of Ukraine), cannot last forever. Something has to be done with it,” says Volodymyr.

According to the workers of the recruitment centre, the average volunteer age for the National Guard constitutes 30 years. The maximum allowed age is 45 years. Just like in the army, the National Guard recruits people starting 18 years, and women can also serve here.

Victor Shelest stands in line to the recruitment point together with the young men. Victor is a businessman, before the crisis in the East he had supplies furniture to Donetsk, at the moment the business is idle. “I will go protect my business interests,” he laughs.

Mr. Shelest has already handed in the necessary documents and is awaiting medical inspection. According to him, the National Guard has a beneficial difference from the regular army consisting of that volunteers serve in it, which have more motivation than those who had been called by conscription.

“Many soldiers (of the Armed Forces) lack the will and assertiveness to carry out orders till the end. Shooting at terrorists, when it is necessary. I don’t have any problems with this, I will kill for my country if I have to,” says Victor.

The businessman hopes that his future commanders are as assertive as he is. 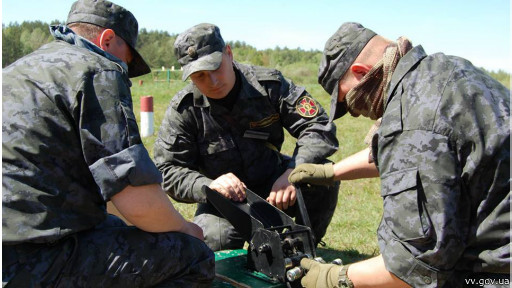 If Victor Shelest and other volunteers of the National Guard pass all checks and committees, they will end up in the training camp located near Kyiv. Here, their military training will last a month. The rookies are being taught or reminded how to behave around weapons, they are working out tactical action.

The head of the National Guard battalion headquarters Andriy Ivchenko claims that the conditions at the training are maximally close to military ones. “We are training our soldiers in a way so they understand under which conditions they would have to work in the future location bases, everything in tradition of the Cossack spirit,” says Mr. Ivchenko.

The soldiers from the second National Guard battalion have almost completed their training, and in several days they will be sent on military missions. Where to exactly, the commandment does not say, however it is understood that the direction is eastward.

The volunteers are not very amicable with journalists and prohibit them from filming their faces. One of them says this attitude is due to the fact that many soldiers of the department are from Donetsk and Lugansk Oblasts. Their families have been left in the East, whose security they are very worried about.

26-year-old Olexander is standing near the entrance to the training centre. He has just accepted the military oath and is saying goodbye to his family. His father looks calm, he says that had suspected his son’s decision, even though he doesn’t fully approve of it:

“See, I came alone, without Olexander’s mother. She would be in tears here. This is the present he gave me for my 57th birthday. What to do, I understand that his decision is the right one. This country has to be sorted out for real.”

Olexander himself has not served before, however he says that he has pretty good athletic training and he is a fan of strike ball – a military game in which pneumatic weapons are used.

“I looked at my friends and acquaintances – everyone is sitting at home, nobody is doing anything. For me to sit in one place and watch the news on TV is much worse than serving here,” says the young man.

“Not training, but a joke”

However not all agree with Olexander. A group of people with Ukrainian symbols on their clothing was spotted next to the training unit. These are Maidan activists who are still living in tents in the Kyiv city centre.

One of the Maidaners, Yaroslav Lavrov, says that they came to convince one of their activists not to serve.

“Why did they come here? So that they are taken to the East and left there with no orders, without normal weapons, as has been done before? What training? This is a joke, and the boys will die in vein for the interests of some politicians,” explains Yaroslav emotionally.

The guardsmen’s training is being criticised by many Ukrainian politicians and analysts as well. In particular, the opinion has been expressed that a month-old training is definitely no enough to send the volunteers to the “hotspots.”

The decision to create the National Guard had been forces, says Ukrainian military expert Sergiy Zgurets. In a conversation with the Russian BBC service the expert noted that its creation was conditioned greatly by the decrease of trust in the soldiers of Donetsk and Lugansk Oblasts, which had sabotaged the orders of the central government frequently.

“In reality, many of the soldiers lack experience, frequently they have to gain it already on location, in the zone of military action. Unfortunately, the situation in the country is so that the government cannot choose and wait, otherwise the country will simply fall apart,” says he.

The value of the National Guard lies in that it can be used where, according to Ukrainian law, the Armed Forces cannot be deployed, as Kyiv still has not announced martial law in the country, opines Serhiy Zgurets.

He also adds that the National Guard has not problems with military equipment, however there are difficulties with ammunition and means of personal protection, which can be solved.

The decision to create the National Guard was not very correct, thinks another military analyst Mikola Sungurovskiy. To his mind, the structure, in which hundreds of Euromaidan activists have come to serve as volunteers, has a big problem: their commanders are MIA officers which before had dispersed protests and countered the Maidaners.

“This causes a number of instances which could have fully been prevented had this decision been planned out better,” thinks the analyst. Meanwhile Mikola Sungurovskiy notes that the creation of the National Guard is a consequence of decay in other law enforcement structures of Ukraine.

“The potential of the defence sector of the country has been undermined significantly in the last four years. It has been undermined by the “reforms” carried out by Yanukovich’s government, and which, in reality, were a commercial project for the redistribution of land, equipment and property,” stated the analyst.

2 thoughts on “What is the National Guard?”