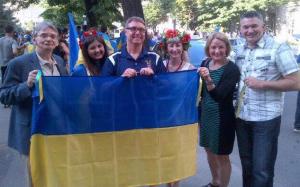 Canadian MP Peggy Nash, who was in Ukraine as an election monitor for the fourth time said, on CBC Radio a day after the May 25 presidential election that “of all the elections I’ve observed, it was the calmest and best run.”

Nash, who is vice-chair of the Canada-Ukrainian Parliamentary Friendship Committee was a monitor in Kharkiv, in northeastern Ukraine.  “We never felt in danger or intimidated at polling stations we visited,” she said.

She also said that in the 10 years that she has been visiting Ukraine as an election monitor the election process “seems to improve every time.”  The election workers “were better educated in the process,” she said.  “The stations we visited were well run and competently run.”

Commenting on the mood of the people in Ukraine, Nash said people “want a normal, free and democratic society, and hopefully a new president who can build normality.”

Nash added that every time she’s visited Ukraine she sees improvements, “new buildings, and old ones restored”…”I see a country being rebuilt.”

1 thought on “Of all the elections I’ve observed, it was the calmest and best run, says Canadian MP Peggy Nash”