Petro Poroshenko, the newly elected President of Ukraine, took an oath before the Ukrainian people and outlined major points of his development plan for Ukraine in his inaugural speech. 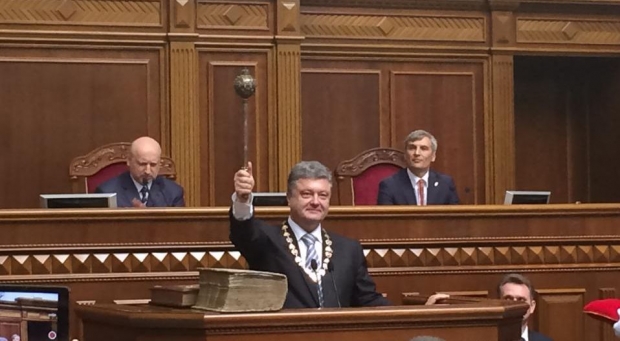 Petro Poroshenko took the Presidential oath at a solemn session in the Ukrainian Verkhovna Rada’s session hall and will continue at the National Sanctuary “Sophia”. The ceremony was attended by representatives of about 60 official foreign delegations.

Some points from inaugural speech of Petro Poroshenko, new President of Ukraine

“I go to the office of President to preserve and strengthen the unity of Ukraine,” Petro Poroshenko said during his inaugural speech on Saturday in the building of the Verkhovna Rada of Ukraine. He started his speech with the words “Glory to Ukraine!”

President of Ukraine Petro Poroshenko declares his readiness to provide a corridor for moving out Russian mercenaries from Ukraine.

“I do not want war, I do not seek revenge, in spite of the sight of great sacrifices made by the Ukrainian people that are before my eyes. I strive for the peace and will achieve Ukraine’s unity. Therefore, I start my work with a plan offering peace,” he said in his inaugural speech on Saturday, May 7, in the building of the Verkhovna Rada of Ukraine.

Poroshenko also strongly urged all those who illegally took up arms to lay them down. “In response to accepting this offer I guarantee, firstly, an exemption from criminal responsibility for those whose hands do not have blood of Ukrainian soldiers and civilians on them, and for those who are not involved in financing terrorism,” the President pointed out. “Secondly, a controlled corridor could be provided for Russian mercenaries who want to return home,” said Ukraine’s newly elected head of state.

President of Ukraine Petro Poroshenko also said that Ukraine has been and will remain a unitary state, noting that “dreams of federalization have no ground in Ukraine”.

“Russia occupied Crimea, which has been and will be Ukrainian. Yesterday I said about this to the Russian leadership [to President Vladimiar Putin] firmly in Normandy. There can be no compromise in this issue,” the President of Ukraine stressed.

In addition, Petro Poroshenko said that the only official language in Ukraine will remain Ukrainian. “A new life means that one can not ignore the will of people, to live free is to speak freely in their native language, as stated in the article 10 of the Constitution. And it defines the Ukrainian language as the only state language, guaranteeing the free development of Russian and other languages,” he said.

In his speech, Poroshenko also mentined that he will be undertaking a trip “to the east of the country with peace” in the nearest future. Speaking in Russian, Poroshenko promised his fellow citizens in Eastern Ukraine: “this is what I will come to you in the near future as as the President of Ukraine. With peace. With a project to decentralize power. With a guarantee to freely use the Russian language in your region. With a firm intention not to divide Ukrainians into those who are right and wrong. With a respectful attitude to specific regions, the rights of local communities to have their peculiarities in matters of historical memory and religious traditions”.

He is also convinced of a necessity to sign the Agreement on the EU-Ukraine Association. “We consider the Association Agreement only as the first step towards the full membership of Ukraine in the European Union,” Poroshenko said.

The President said that he is ready to sign the second part of the Association Agreement with the EU, related to the establishment of a free trade area, and awaits the respective readiness from the European side.

“I think that the position of the Ukrainian Parliament and the will of the Ukrainian people will create all conditions for Ukraine to receive EU membership in perspective, because no one has the right to veto the European choice,” said the new president of Ukraine.

President Petro Poroshenko also called for an agreement between the government and the people of Ukraine for a joint fight against corruption. “We need a national anti-corruption pact between the government and the people. Its essence is simple: officials do not take, and people do not give [bribes]. We cannot change the country if we do not change themselves, our attitude to our own lives, to the life of the whole country”.