Recently, a heartbreaking picture from the Eastern Ukrainian city of Sloviansk, where the Ukrainian Army is carrying out the anti-terrorist operation, has flown around the internet. The picture shows a baby boy, Yevheniy Yezekyan, who suffers from cerebral palsy and could not be evacuated because of being connected to an artificial lung ventilation machine. 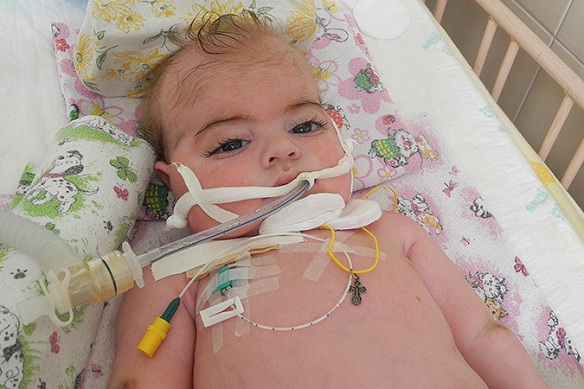 Almost immediately, activists appeared that worked on setting up a solution to transport Yevheniy out of the battle zone. Natalia Stativko wrote an account of how it happened:

“We have been busy for two days preparing to evacuate Yevheniy Yezekyan from Sloviansk to Kharkiv. This was extremely difficult – just imagine a 8 month old baby who cannot breathe independently, only with the help of a medical ventilator. He can be transported only with a special intensive care ambulance. There were two intensive care ambulances prepared: on in Kharkiv and the other one in Donetsk. With each ambulance there was a health team ready to go for the child despite the war.

In Kharkiv they prepared a chamber, all necessary equipment and medical supplies. The security forces formed a squad escort. All these things are against the rules. Neither should the security forces let civilian physicians go into the war zone, nor do the physicians with complex equipment have anything to do under fire, nor do we have that many ambulances. Nor do officials have any right to send doctors to face up to the bullets. And it is just scary…

But there were volunteers in every department. What do you say when it all gets crazy… The representatives agreed with the baby’s mother that they will transport them to Kharkiv and then if they want, they will prepare to move them to Rostov to their relatives. The mother really did not care where to go, she agreed to any proposal just to escape from the war, just to take her baby out of that hell. We all understand her… Representatives of the public organization “Mothers for Peace” went to Sloviansk to accompany the baby, promised to build a live corridor should that be necessary… By today’s noon everything was ready.

The only thing left to do is to get approval from the separatists – even a shadow of a guarantee that the car with the child will not be shot. No! Even not approval! We just wanted to give them notice, tell them that we are going to transport a child, just stay human, let him go…

No! Russian journalists working in Sloviansk, passed us an ultimatum: either their [separatists] side lets the car with Yevheniy pass to the border and takes him to Moscow, or they won’t let the car pass. We yielded to that. Russian propaganda needs a 8 months old baby with a horrible diagnosis, extremely unfavorable prognosis, in a grave condition. This is just a great PR move for them: an endeavour to save a child from the clutches of “Ukrainian fascists”!

Hopefully Yehveniy will be taken out today. Deo volente, he will be safe. Tomorrow we expect to see mass hysteria in the Russian media. Such is war now.

PS. We, “Ukrainian jews-fascist-banderivtsy” will never take the risk of a child. God forgive us, in accordance with King’s Solomon parable.”

Indeed, the next day Russian media spawned with reports on how the Ukrainians thwarted the rescue. Russian journalists of the NTV channel took full credit for rescuing the child, accusing the Ukrainian authorities of prohibitions to leave the country. Currently, Yevheniy is undergoing treatment in Rostov-na-Donu, having being used