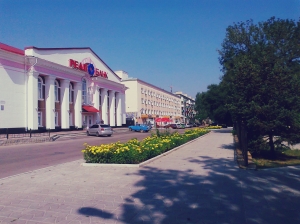 Some two hundred armed commandos have arrived in the city of Lysychansk in the Luhansk Oblast from Russia and one of the states of Central Asia, UNN reports, June 11, citing Luhansk police sources. According to the sources, the armed men do not hide their nationality

“According to preliminary information, almost two hundred men have arrived. Those with Slavic appearance state they have arrived from the Krasnodar region (in Russia). Others are Asiatic in appearance. According to preliminary information, they are from Kazakhstan. They came to Lysychansk immediately after the capture of the district prosecutor’s office by terrorists. All these ‘aliens’ have settled in the prosecutor’s office,” the police sources say.

As previously reported, on Tuesday, June 11, at 3:00 am, terrorists seized the premises of the prosecutor’s office and “evicted” all employees.