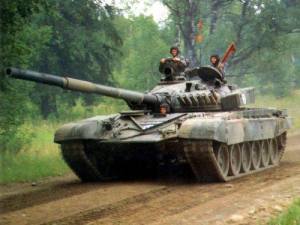 A column of military vehicles passed through checkpoints seized by terrorists

As reported by the Ukrainain channel TSN, a column of military vehicles, such as armored personnel carriers and armored cars with artillery, penetrated Ukraine from Russia. Arsen Avakov, Ukraine’s Minister of Interior announced this news at a briefing in Kyiv on Thursday, June 12 (video, in Russian, from TSN News report). He noted that military vehicles and equipment are coming through seized Ukrainian checkpoints on the eastern border with Russia.

According to “intelligence data and relevant surveillance, we can see that over the past three days, despite claims of the Russian Federation that they welcome the peace process and that orders have been given to tighten control over the border from the side of Russia, penetration of columns through seized by terrorists checkpoints, particularly in Ďiakovo (Luhansk region) continues,” said Avakov.

In addition, Avakov confirmed the information that appeared earlier in the media that Ukraine’s border was crossed by three tanks on June 12.  The tanks then went to Snizhne (Snaezhnoye), a town in the Donetsk region. “Then the two tanks moved toward Horlivka, in the Donetsk region where they were attacked by our [Ukrainian] armed forces,” said the Interior Minister.

Earlier, a video on the Internet appeared showing trucks and armored personnel carriers with terrorists that arrived at Snizhne (Snezhoye). Avakov said that the battle was still continuing at that time. “I still can not say what the final result is, I can only say that part of this column is destroyed,” said Avakov. As reported earlier, terrorists in Snizhne  were armed with two tanks of the Russian army, according to Dmytro Tymchuk, the coordinator of the “Information opposition” blog. According to him, it was T-72 tanks. As was confirmed later by the anti-terrorist operation (ATO) center, the model of tanks was T-64.

One more video showing a column of three tanks and Kamaz trucks supposedly coming to Donetsk appeared on the Internet.  The column in the video is in Makiyivka. This news was  reported on Liga.Net, making reference to the Donbas News site.

Additional military equipment and multiple rocket launchers BM-21 “Grad” are deployed on Russian territory and can be sent to Ukraine, 112.ua reported.

As UNIAN reported, according to the President of Ukraine’s press secretary, Svyatoslav Tsegolko, President Petro Poroshenko, during his conversation with Russian President Vladimir Putin, referred to the situation, of tanks coming through the Ukrainian border, as unacceptable.  Poroshenko held an urgent meeting with leaders of defense and law enforcement agencies.

As earlier discussed in an Euromaidan PR article “Russian Tanks Cross Ukrainian Border,”  the current approach of Russia is not new to Russian tactics and was first used by Russia in November 1994.

The November 1994 Battle of Grozny was an abortive coup d’état attempt by Chechen opposition forces, sponsored and aided by the government of the Russian Federation, to seize the Chechen capital of Grozny and overthrow Chechen President Dzhokhar Dudayev. The attack was conducted by armed formations of the Chechen opposition council with the clandestine support of Russian federal armored carriers, tanks and aircraft on November 26, 1994.

What was supposed to be a quick underground operation against the separatist government of the Chechen Republic of Ichkeria (ChRI) ended in a spectacular fiasco, prompting the government in Moscow to initiate a large-scale military invasion of the republic beginning in December 1994.

Russia denied that Russian tanks and military participated in this operation. The defeat on November 26, 1994 was catastrophic, not only in military but also in political terms. Russian complicity in and knowledge of the operation was at first denied by Moscow, but then acknowledged after 20 captured Russian servicemen were paraded before television cameras and Dudayev threatened to shoot them should Yelstin not recognize his own soldiers. On December 1, 1994 Yeltsin vowed to help the Russian prisoners, which was the first indirect acknowledgement of Russian involvement.

That is why such similar actions now from the Russian side could be considered as a direct invasion by Russia of Ukraine.

Compiled and translated by Vitalii Usenko; edited by Olena Wawryshyn

2 thoughts on “Military vehicles break through Ukrainian border from Russia”