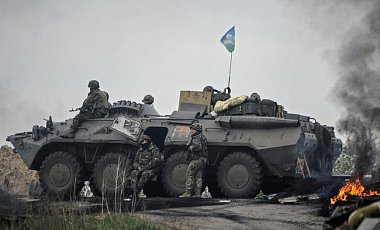 During combat clashes on June 13, four Ukrainian special forces servicemen were killed in action  and 31 wounded. No data is available on the terrorist’s casualties

There were a number of combat clashes between terrorists and ATO forces in the area of ​​anti-terrorism operation (ATO) last night, Dmitry Tymchuk, the head of the Center for Military-Political Studies, stated on his Facebook page. He states that Ukrainian special forces destroyed two battle tanks which arrived earlier at the disposal of pro-Russian terrorists. ATO forces have also destroyed three armored personnel carriers, two trucks transporting terrorists and weapon, two vehicles mounted with heavy machine guns Degtyariov-Shpagin (DSHK).

“Three convoys invaded from Russia were blocked and seized by ATO forces captured in the areas bordering on Russia. Seized vehicles were carrying ammunition and weapons for terrorists,” – noted Dmitry Tymchuk.

Tymchuk reported that during the combat clashes four Ukrainian special forces servicemen were killed in action  and 31wounded. No available data on terrorists casualties at the moment.

Earlier, on June 12, Arsen Avakov, the Minister of Interior said that convoys of military vehicles entered eastern Ukraine through checkpoints seized by terrorists on the Eastern border of Ukraine. He confirmed information that three tanks passed through the border of Ukraine. According to preliminary data, these are T-72 tanks, which are in service in the Russian army. The Ukrainian army does not have this model of tanks. As was commented earlier by EuromaidanPR, due to numerous modifications of the T-72 and T-64 and inter-connections between defense industries of Ukraine and Russia it is hard to determine tank model only from a video.

In the evening of June 12, 2014, a convoy of three Russian main battle tanks and two KAMAZ trucks with terrorists entered Donetsk from Makiyivka. Later in the evening, Ukrainian President Petro Poroshenko called this situation “unacceptable” in a telephone conversation with Vladimir Putin, President of the Russian Federation.