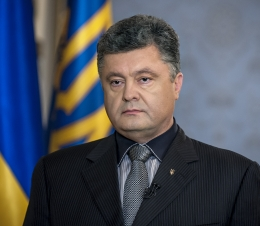 Address of President Petro Poroshenko to the citizens of Ukraine, June 14, 2014

Today in Luhansk and Mariupol a terrible tragedy took place. Our military and border guards were slain. I bow my head before the heroes who died during the combat mission to restore the state border of Ukraine. And, at the same time, I am proud of the Ukrainian soldiers, border guards, commandos, and paratroopers who resolutely continue to fight for peace in our land.

Today Ukraine grieves for the fallen heroes. I have received numerous calls from the leaders of the democratic countries of the world, who express their sincere condolences to our people. We will do everything possible for those responsible for the deaths of the military to be found, and for the terrorists to receive a fitting response and punishment.

You need to know that today, for the first time, the Ukrainian army went on the offensive. Our armed forces have begun to squeeze the terrorists. As a first priority, I have directed the Armed Forces of Ukraine to take control of the state border of Ukraine, through which the terrorists are receiving weapons, equipment, support, and money. During the last four days, as part of a special operation, peace, law, and order have been established in Mariupol, and 248 kilometers of the state border have been brought under control. In a number of communities in the Luhansk and Donetsk oblasts, the activities of the mercenary militants have been stopped. Eleven communities have been cleared of terrorists. During the last 24 hours, 7 motor convoys with weapons and ammunition have been destroyed, as well as several tanks, multiple-launch rocket systems, and reactive volley-fire systems. Today our military seized another Grad rocket launch system.

On Monday, June 16, I shall call a meeting of the National Security Council. On the agenda is the operation to renew the state border. And, as the second topic — decisive steps to implement a peace plan in the Donbas.

For the sake of peace in Ukraine we will act firmly and with purpose.