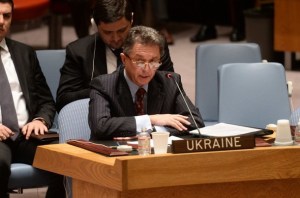 President Poroshenko’s peace plan has generated a positive reaction at the United Nations and an appreciation that this step can help achieve peace and lead to dialogue, said Ukraine’s representative to the UN, Yuriy Serheyev, during an interview with Inter TV Channel, Sunday, June 22.

According to Serheyev, there is no chance that international representatives would take part in negotiations with representatives of terrorist organizations. One of the principles of the UN is “no dialogue with terrorists,” he pointed out.

“This is especially true since Girkin and others are citizens of Russia and have no right to discuss the resolution of problems in Ukraine,” he said.

Serheyev also said there is no doubt at the UN about the Russian origin and citizenship of the militants in Eastern Ukraine.

Additionally, Seheyev described how the Ukrainian side is forced to refute on a daily basis the various falsifications introduced into the media space by the Russian Federation for purposes of propaganda.

He explained that at present there is no way to exclude Russia from the organization, since the final decision is up to the UN Security Council, which is currently chaired by Russia.

As has been reported, on June 20, President Petro Poroshenko ordered a week-long ceasefire by the Armed Forces, National Guard and Border Patrol of Ukraine. The ceasefire went into effect on June 20, at 22:00, and will continue until June 27, at 10:00.