Minister of Internal Affairs Arsen Avakov released details regarding the release of ten separatists connected to the tragedy in Odesa on Saturday. The news comes from Yuriy Butusov, who quotes the minister.

The separatists detained in Odesa were released because of the Deputy Attorney General’s personal decision. He prohibited their transportation to Kyiv for further investigation, and the prosecutor agreed on the decision about their release. END_OF_DOCUMENT_TOKEN_TO_BE_REPLACED

The Ukrainian forces involved in the antiterrorist operation (ATO) in the east of Ukraine do not storm residential areas and do their best to avoid civilian casualties, said the Minister of Internal Affairs of Ukraine Arseniy Avakov.

“We do not use ATO forces to storm residential areas and we establish restrictions on attacking areas with civilians,” Arseniy Avakov told journalists at the entrance to Slovyansk in the Donetsk Oblast on Monday, May 5, reports Interfax Ukraine. END_OF_DOCUMENT_TOKEN_TO_BE_REPLACED

Ukrainska Pravda, 12 April 2014, 22:52
Zaporizhzhia’s self-defense forces announced a Sunday mobilization for the city. Local representatives of Self Defense are getting ready for provocateurs’ arrival in town, Radio Svoboda reports.

People’s Self Defense asks men to support the mobilization announced for Sunday, and they ask them to come to their headquarters in the Regional State Administration (RSA) building at 9 a.m.

END_OF_DOCUMENT_TOKEN_TO_BE_REPLACED

activist Serhiy Bondar before and after meeting Avakov’s cops in the Kharkiv Region.

The first reports are coming in about those activists arrested near Kharkiv or in it.

In particular, these reports to INFORMATOR mention that law enforcement and separatists, armed with automatic rifles, were waiting for them at entrances to the Kharkiv Region on both sides of the road.

Ordinary police made up a majority of the law enforcement personnel, but soldiers from the disbanded Berkut special forces and soldiers from Sokil’ special forces also took part in the arrests. The latter, after breaking bus windows, leapt inside and took activists out onto the road, and then laid them out on the pavement. END_OF_DOCUMENT_TOKEN_TO_BE_REPLACED

Blog from the Personal Webpage of Anatoliy Hrytsenko

The regime did nothing and watched passively as Putin took over Crimea. How one military base after another “fell,” how ships and airfields were taken… Putin had already taken over Crimea…

Now the regime, too, is doing nothing, and it is watching on passively as Putin takes over Eastern Ukraine – Luhansk, Donetsk, Kharkiv… END_OF_DOCUMENT_TOKEN_TO_BE_REPLACED

Minister of Internal Affairs Arsen Avakov reports that Party of Regions’ National Deputy Yuriy Ivaniushchenko is involved in the murder of activists of Maidan on February 18. The murderer of journalist Veremiya received his bullets in the Ministry of Internal Affairs. END_OF_DOCUMENT_TOKEN_TO_BE_REPLACED

The Right Sector produced a statement saying that the shooting which took place on Khreshchatyk was due to a misunderstanding, which led to a domestic conflict.

“In the evening of March 31, 2014, near European Square in Kyiv there was an unfortunate incident involving members of Maidan Self-Defense and the Right Sector. A misunderstanding of a domestic nature resulted in a conflict with firearms. As a result, the shooting was not without victims,” the statement said. END_OF_DOCUMENT_TOKEN_TO_BE_REPLACED

1. One of the organizers of the separatist rally and seizure of Governor’s office in Luhansk, Arsen Klinchaev, has been detained. This is a natural outcome. Regardless, this is to be determined by a court.

What is more questionable is, how do we respond to the video showing Klinchaev’s  “civic arrest” by MP Oleh Lyashko, which has been posted online. END_OF_DOCUMENT_TOKEN_TO_BE_REPLACED 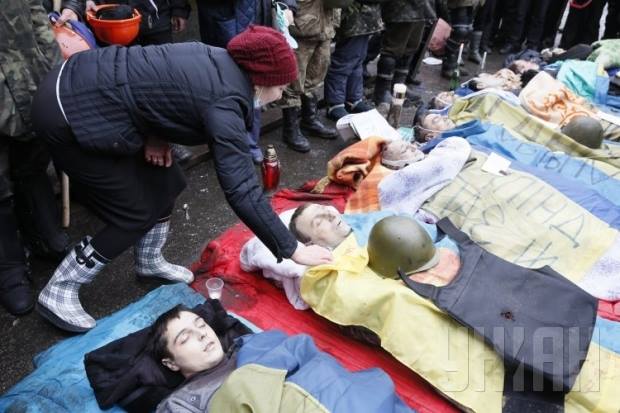 “Two weeks ago bullets were flying in Kyiv, in the very center,” he said. “A very serious investigation is underway. I think the time will come when we release the facts: who was shooting whom and on whose command. Fact are now being pieced together. I can just say one thing: the key factor in the confrontation which resulted in the bloody slaughter in Kyiv, turned the battlefield upside down and induced a state of shock was a third force. This force was not Ukrainian. We must understand this very clearly,” he said. END_OF_DOCUMENT_TOKEN_TO_BE_REPLACED

The Head of the Security Service of Ukraine Valentyn Nalyvaychenko and I spent the whole night settling the situation in Sevastopil and… searching for the former President of Ukraine.

On Friday, February 21, V.F. Yanukovych, accompanied by A.P. Klyuyev, left Kyiv by helicopter for Kharkiv, where Yanukovych intended to take part in the Congress of the Deputies of the Party of Regions. END_OF_DOCUMENT_TOKEN_TO_BE_REPLACED