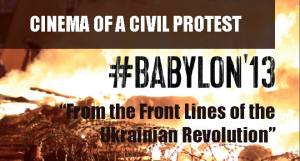 in English see below

Following a warm reception in New York, Toronto, Oslo, Amsterdam, The Hague and Eindhoven, Groningen also hosted a screening of films by Babylon’13 – Cinema of Civil Protest. Babylon’13 is a collective of Ukrainian filmmakers who have documented the recent uprising in Kyiv, the annexation of Crimea and separatism in Eastern Ukraine. Eyewitness Cristian Jereghi – in the Netherlands to promote BOB (Best of Online Activism) winner #babylon ’13 as one of its directors – was on hand to screen and discuss 15 documentary shorts. These films capture the Ukrainian revolution from the perspective of protesters, separatists and soldiers, among others – those who are shaping Ukraine’s destiny and writing the next chapter of its history. The screening was held on 28 May 2014 in the Library of the University of Groningen, and was followed up by  helmet-painting workshop.

When the former president of Ukraine, Viktor Yanukovych, refused to sign an association agreement with the EU in November 2013, the first protesters took to the streets of Kyiv. In the months that followed, the demonstrations grew, as did the violence against those gathered on Maidan. Yanukovych finally fled Ukraine in February 2014, under mounting pressure due to public outrage at the deadly confrontations in Kyiv. It was a surprising yet long-awaited victory. Yet, bigger surprises were still to come: the annexation of Crimea, separatism in Eastern Ukraine and “war” with Russia. The historic events that unfolded on Maidan were quickly followed by those now changing the course not only of Ukraine’s history but quite possibly Europe – and the world. Watch the films that were shown at the screening online.

We are proud to announce that EuromaidanPR is continuing subtitling Babylon’13 films in different languages, and that ‘Self Defense’ can now be viewed with English subtitles (please make sure to turn them on in the captions function). We will continue to subtitle the best films of Euromaidan and invite all that wish to participate. Please send a message to https://www.facebook.com/euromaidanpr or leave a comment under this post.

We are proud to announce that EuromaidanPR is continuing subtitling Babylon’13 films in different languages, and that ‘Heaven’s Hundred’ can now be viewed with English and Italian subtitles (please make sure to turn them on in the captions function). We will continue to subtitle the best films of Euromaidan and invite all that wish to participate. Please send a message to https://www.facebook.com/euromaidanpr or leave a comment under this post.

END_OF_DOCUMENT_TOKEN_TO_BE_REPLACED

‘Heaven’s Hundred’, the first film in a series of documentaries titled ‘The Winter That Changed Us All’, is translated into English by EuromaidanPR.

Channel ‘1+1’ and the creative association ‘Babylon 13 filmed a series of documentaries ‘The Winter That Changed Us All’ about the revolutionary events this winter. On April 3, the first film of the series, ‘Heaven’s Hundred’, was released.

“This is a story of those who died for freedom and for their own country. It is still unknown how many people there are in the Heaven’s Hundred… It is not only those who were killed in the center of the Ukraine’s capital at the end of February. It’s also all those who protested against the regime in different parts of the country, and then went missing or had been murdered since the Euromaidan’s beginning,” is said in the description to the film.

EuromaidanPR invites all those that want to contribute to translating Babylon 13’s films to do so by translating, editing, and assembling subtitles. Please sign up by sending us a message in FB.