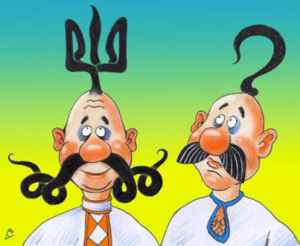 Take a tolerant Russian-speaking Ukrainian and subject him to the following manipulations:

Break agreements signed with his country and support a criminal regime; give refuge to the leader of this regime who is guilty of embezzlement; turn TV channels that are being watched by half of Ukraine into a platform for slander, hate speech and deception; call Ukraine a quasi-state and its government a junta; spread lies that Russian-speaking Ukrainians are being abused because of their language; seize a piece of Ukraine’s territory; embark on a dirty propaganda war against his country; support the separatists who wish to split the state; unleash a gang of lying Internet trolls and propagandists; snub the international community and collective security…

Thus, the negative connotation of the notion ‘banderivets’ which used to mean a thug, a killer and an enemy of the Soviet regime, the connotation that was systematically inculcated throughout the postwar period, now easily transforms into a positive one – a partisan, a fighter for independence, a freedom-loving person struggling against the Soviet authorities. Interestingly, the concept of the ‘Soviet power’ has undergone no change. It has not gone down the drain, it is still etched in minds of the people.

Dear Comrade Putin! Dear Soviet citizens of Russia who turned out to be a great many!

Thank you for inducing me and others like me to learn the [Ukrainian] anthem, to install the flag on my car, to start respecting the language, to reevaluate certain historical facts! There is no greater motivation to love our Motherland than the external threat, the disrespect for the people of the country of 46 million and the uncontrollable megalomania of the inadequate neighbor.

Thank you for helping us make up our minds about the direction of our country’s development and understand who is our friend and who is our enemy.

Do not worry, we are going to be fine. The only thing that matters is that you do not go saving anybody here or, God forbid, come to defend us.

We wish you well. We promise not to interfere in your affairs, not to claim back Krasnodar and Stavropol regions.)))

We will live peacefully and happily, but let us do it separately from each other.

We will move towards the EU and USA, we will cooperate with NATO, all in all, we are going to integrate into a society that overcame fascism and tolerates gays. And you will ravel in your own spiritual convulsions, intolerance and nazi-saluting homophobes.

You have managed the impossible: until now we were a population, now we grew to be a nation.

Thank you for your help.

*Designation ‘Banderivets’ refers to a follower or sympathizer of Stepan Bandera, the leader of WWII anti-Soviet nationalistic insurgency in Western Ukraine (ed.)

Mosche Reuven Asman is the Chief Rabbi Hasidic Jews (Chabad – Lubavich Movement), Ukrainian Congress of Jewish Religious Communities.
Born in Leningrad, he lived in Israel after his marriage, and then worked as an assistant Rabbi of Toronto teaching Russian-speaking Jews. He then returned to Ukraine. He is extraordinarily intelligent, has personally met many politicians and is also acquainted with many successful business men and women in Ukraine and Russia.
During the course of the past few months Moshe Asman has commented on the absence of anti-Semitism in Ukraine, on lies regarding alleged aggression towards Jews as well as on a number of provocations that have been created to mislead the observers of Maidan movement regarding the true motivations behind the revolution in Ukraine.
In a conversation with Ukrainska Pravda, Moshe Asman shares his wisdom on life, conveyed with restraint and a willingness to share his thoughts. Recently Moshe Asman’s words were misinterpreted. Israel’s Haaretz published inflammatory information indicating that Moshe Asman called on all Jews to leave Kyiv.
We had an opportunity to speak to the Chief Rabbi of Ukraine on topics that touched both politics as well as society in the Capital building of Brodsky Synagogue, which he incidentally helped return to the Kyiv community.

END_OF_DOCUMENT_TOKEN_TO_BE_REPLACED

The figure of Stepan Bandera is once again in the spotlight, in connection with the revolutionary developments in Ukraine. Moscow commentators and participants of pro-Russian demonstrations in Crimea call the new government of Ukraine “Banderites” after Stepan Bandera, portraying  him as the devil incarnate.

In the estimations of observers, the followers of of the leader of OUN/UPA constitute only one minute segment of the “Orange” movement, but they attract a lot of attention because of their radicalism and excess. In real politics, they do not have any chance of affecting the policies of the government. This is just a scare tactic meant to discredit the proponents of European Orientation.