The commander of Donbas Battalion of the Territorial Volunteer Defense Forces (DFD) never takes his balaclava off when talking to journalists. Nobody knows for sure if Semion Semionchenko is his real name or just an alias. He does not want extra fame, yet he continues to reports all main activities of the unit in the social media. Now he came to Kyiv to form a new battalion of the National Guard. Every day, there are about 100-150 calls from potential volunteers. They are screened and shortlisted, then they undergo a physical, and are sent off to the Internal Troops boot camps. END_OF_DOCUMENT_TOKEN_TO_BE_REPLACED

On 23 May 2014 a battle took place near Karlovka between the pro-Ukrainian patriotic volunteer Defense force “Donbas” and the terrorist battalion “Vostok”. The Donbas battalion has given its account on the course of events on their facebook page.

Early in the morning a platoon of 25 persons of the civilian volunteer Defense Force “Donbas”, of whom 80% are residents of the Donetsk Oblast, moving by several cars and minibuses, ran into an ambush of terrorists from the so-called “battalion “Vostok [‘East’ in Russian]”, numbering 100 persons. The Donbas battalion was armed with small arms, hand grenades, 1 sniper rifle, while the Vostok battalion was armed with sufficiently heavier weaponry: small arms, heavy weapons (large-caliber machine guns and grenade launchers), three APCs, and had a group of several snipers. As per the Donbas battalion, 80% of the terrorists from “battalion Vostok” do not live in the region, being Chechen terrorists, fighters of the former Crimean “Alpha” [special unit of Security Service], fighters of the former Crimean “Berkut” [a special police force known for its violent actions against Euromaidan protesters], while 20% are civilian fighters from the self-proclaimed terrorist republic “Donetsk People’s Republic” (DPR).

END_OF_DOCUMENT_TOKEN_TO_BE_REPLACED

As soon as it became obvious that Defense force “Donbas” is capable of mopping-up terrorists from next and next districts of the Donetsk region, an unaccountable event happened. Actually, there is an explanation. “Donbas” has been betrayed and information about its movement route became know to the terrorists. “Donbas” ran into an ambush near village Karlovka and accepted battle. Snipers, submachine gunners were engaged against “Donbas” and bazookas were being used. There are wounded (the amount is being verified). There are 2 persons in the hospital of one of the nearby towns, 2 persons were moved from the block-post to the hospital. One of them is in the surgery operating theatre and the other one is in traumatic surgery. Guards were left near the hospital with the wounded. The other wounded are waiting for evacuation.  END_OF_DOCUMENT_TOKEN_TO_BE_REPLACED

The commander of the “Donbass” Defence Unit Semyon Semyonchenko gave an interview to the Russian TV channel “Dozhd” in which he explained why he decided to take up arms, in what way the situation in Sloviansk, in his opinion, is similar to the Russian Chechen war, and whether Ukraine can ever be the same. This interview was conducted by Timur Olevsky. A translation of the interview was published on the Ukrainian Volunteer Defense Force ‘Donbass’ FB page.

Olevsky: Who are the people that support the separatists? It is commonly assumed in Ukraine that separatists that are fighting right now in Slavyansk are people from Russia, that Russians are behind this all. Who are those people in your opinion? END_OF_DOCUMENT_TOKEN_TO_BE_REPLACED 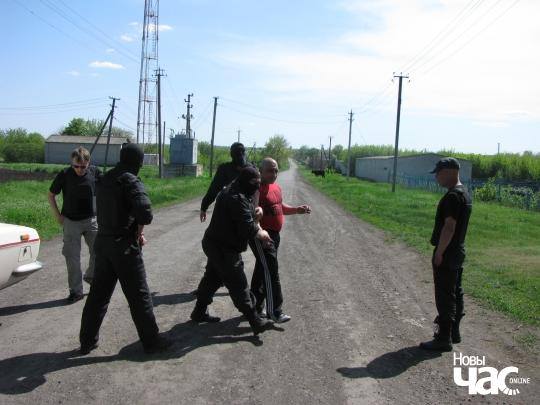 On 28 April 2014, Donbas’ patriotic volunteer defense battalion held an operation in which they thwarted an attempt to kidnap three journalists of Agence France-presse near Kransoarmiysk (Donetsk Oblast). The taxi driver, a previously convicted active member of the pro-Russian separatist movement from Krasnoarmiysk, was planning to take the group of journalists to a separatist base and later transfer them to the separatist stronghold city of Kramatorsk. END_OF_DOCUMENT_TOKEN_TO_BE_REPLACED

Donbas, the volunteer battalion of territorial defense of the Donetsk Oblast, has freed the police department in Velyka Novosilka from the corrupt police employees that had sided with terrorists. This development was announced by the battalion’s commander Semen Semenchenko on his Facebook, May 15, as reported by Dzerkalo Tyzhnya.