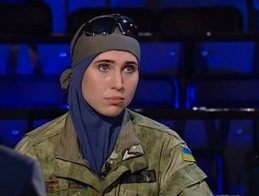 Experienced Chechen war veterans that took part in warfare in Chechnya and the Middle East are opposing Russian imperialism and offer Ukraine their support.

“In this world there are many people who are ready to fight against Russian imperialism, or in other words are ready to support Ukraine as a peacekeeping battalion,” said Amina Okueva, a representative of the organization “Volniy Kavkaz” [Free Caucasus].

She also noted that about a thousand war volunteers are ready to stand by Ukrainians at any time; however there is no law in Ukraine that would allow the formation of foreign battalions. Okueva stated that she would like to see this issue resolved. END_OF_DOCUMENT_TOKEN_TO_BE_REPLACED

Drug addict and self-proclaimed “mayor” of Sloviansk Vyacheslav Ponomarev gathered the few supporters that still remained with him and said that Chechen mercenaries are going to level Sloviansk to the ground. Thus, Ponomarev confessed that Russian curators  practically set them up and allowed the Chechens to burn the city to the ground. END_OF_DOCUMENT_TOKEN_TO_BE_REPLACED

Statement by the Information Policy Department of the Ministry of Foreign Affairs of Ukraine on Russia’s support of terrorist activities in the Donetsk and Luhansk oblasts, June 2, 2014

In connection with the growing number of incidents of penetration of Ukrainian territory by armed militants from the Russian Federation, and also with the intensification of their terrorist activities in the Donetsk and Luhansk oblasts threatening the lives and safety of Ukrainian citizens, the MFA of Ukraine once again categorically protests against the policies of the Kremlin aimed at providing military, logistical, economic, and financial support to the terrorist organizations DPR (Donetsk People’s Republic) and LPR (Lohansk People’s Republic). Of particular concern are statements by several official representatives of the Russian Federation, especially Ramzan Kadyrov, which confirm their intention to continue the practice of strengthening the ranks of terrorists with corresponding Russian special forces. END_OF_DOCUMENT_TOKEN_TO_BE_REPLACED

Thirty-five to 45 Chechens who were killed in Donetsk Oblast during the fighting have been brought home; according to Chechnya residents, many of them had previously served in special forces battalions.

The security structures of the Chechen Republic have refused to comment on this information, writes the newspaper Kavkhazskiy Utel.

One Chechnya resident said, “I have a relative working in the security services. He said that several dozen dead bodies were delivered home from Ukraine; these were our boys who fought on the side of the militia.”

“Most of those who were killed came from the Gudermeskiy, Shalinskiy and Urus-Martanivskiy districts. It is alleged that six dead bodies were delivered to one district and four to another. But this information is purposefully not being spread because of an order issued by our officials. The bodies are being buried in local cemeteries,” he noted. END_OF_DOCUMENT_TOKEN_TO_BE_REPLACED

Ukrainians have become almost used to reading news that “Chechens are operating in the Donbas.” Peaceful civilians occasionally see people “of Caucasian nationality.” Leaders of pro-Ukrainian forces claim they fought with “trained Chechens.”

Sometimes there are even strange reports that supposedly unwilling Chechens are being forced to fight in Ukraine. Nobody can say with absolute accuracy how much truth there is to all these reports — not even the Moscow organizers of the operation in eastern Ukraine — or their Grozny puppets.