A 14-year old boy from Snizhne in Donetsk Oblast shared a harrowing story about terrorists shooting and killing his father, sister, and uncle right before his eyes. The brave boy wishes to get well and return back to his mother.

According to Tolik, his family was in a car, attempting to leave Snizhne and seek refuge at this grandmother’s house in Artemivsk. On their way out of the city, armed terrorists opened fire on their vehicle, killing all of his relatives that were in the car.

During subsequent surgery doctors were able to remove 4 large bullet fragments and several smaller ones. The brave child is now in recovery, his condition is improving. He also received antibacterial and infusion therapy. Tolik is able to answer questions about the horrible events, but starts crying as soon as he does.  END_OF_DOCUMENT_TOKEN_TO_BE_REPLACED

Zhirinovsky and Pushilin in Moscow

One of the terrorist leaders of the so-called Donetsk People’s Republic, Denis Pushilin, is currently in Russia, as confirmed by BBC Moscow correspondent Daniel Sandford in his twitter “Denis Pushilin in Moscow,” which includes the photo of Pushilin’s meeting with the leader of the Liberal Democratic Party of Russia Vladimir Zhirinovsky, reports Ukrainska Pravda, June 11. END_OF_DOCUMENT_TOKEN_TO_BE_REPLACED

Drug addict and self-proclaimed “mayor” of Sloviansk Vyacheslav Ponomarev gathered the few supporters that still remained with him and said that Chechen mercenaries are going to level Sloviansk to the ground. Thus, Ponomarev confessed that Russian curators  practically set them up and allowed the Chechens to burn the city to the ground. END_OF_DOCUMENT_TOKEN_TO_BE_REPLACED

Pro-Russian local terrorists near Donetsk would like to join the ranks of the Anti-Terrorist Operation (ATO): they want to clear Donbass together with ATO from Russian mercenaries.

Journalist Andrey Bulgarov posted in his FB account with reference to a source that a group of terrorists at a Ukrainian military checkpoint near Donetsk asked to join the servicemen of the ATO. END_OF_DOCUMENT_TOKEN_TO_BE_REPLACED

Olexandr Ratiy is a young film director from Alchevsk in Luhansk Oblast.

He made his first short film “The Return” there. The documentary brought about his victory at the cinema festival “Molodist.”

The director made his second film, “Simple Things,” in Kyiv, where he has been living for the last 6 years. He returned with it from the Cannes cinema forum recently.

Regardless of the film locations, says Olexandr Ratiy, he is trying to convey the same theses that Donbas is attempting to express through his work. They, according to the artist, are really universal and understandable both in the East and West.

In an interview to BBC Ukraine he talked about the consequences of the weak cultural policies in Donbas, the reasons for separatism and the language that everyone is ready to hear.  END_OF_DOCUMENT_TOKEN_TO_BE_REPLACED

This is reported by the Institute for Religious Freedom based on an analysis of information on violations of the rights of believers in the Donetsk region by gunmen of the self-proclaimed Donetsk People’s Republic.

On April 15, 2014, masked men with a Russian flag posted anti-Semitic leaflets near the synagogue in Donetsk on behalf of Dennis Pushilin, the self-proclaimed ‘People’s Governor’ of the DNR.

“All citizens of Jewish nationality over 16 years of age residing in the territory of the Donetsk People’s Republic are required to apply for registration with the Acting Commissioner of Nationalities in room #514 of the Donetsk Regional Administration building prior to May 3, 2014. The registration fee is 50 USD,” the leaflet said. END_OF_DOCUMENT_TOKEN_TO_BE_REPLACED

Serhiy Popov, one of the leaders of the Citizen Platform, gave a video interview during the Savik Shuster studio talk show, in which he stated that terrorists from the so-called “Donetsk People’s Republic” while driving from the airport to the Donetsk city center in a KAMAZ military truck were shooting in all directions at all people that they met on the way. The aim was to create a picture for Russian TV channels, showing purported atrocities of the Ukrainian special forces during the anti-terrorist operation in Donetsk. END_OF_DOCUMENT_TOKEN_TO_BE_REPLACED

Bolotov believes that the cleaning of Donetsk by the forces of the anti-terrorist operation conducted by the Ukrainian government and the city’s submission to the Ukrainian army is a crime committed by the DNR head Denis Pushilin against his own people.

“On LPR’s territory Denis Pushilin and his inner circle are considered to be traitors and persona non grata. According to the laws of war, as traitors to their own people, they are subject to liquidation,” said the head of the LPR. He added that he considers the head of the DPR an outlaw and declares war on him. END_OF_DOCUMENT_TOKEN_TO_BE_REPLACED 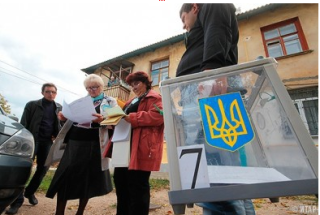 The representatives of the self-proclaimed ‘Donetsk People’s Republic’ have showed up to the meeting of the electoral commission in the comprehensive secondary school number 64, and have demanded that they close down the polling station.

However, the members of the electoral commission did not obey, saying: – “Nobody was interfering with your referendum, now do not interfere with our elections”. END_OF_DOCUMENT_TOKEN_TO_BE_REPLACED