The Governor of the Donetsk Oblast State Administration Serhiy Taruta announced that militants in the oblast are holding more than 200 hostages, reported Tyzhden.ua, June 6, citing the press service of the oblast administration.

“Today talks are focused on the release of the hostages. The militants are now illegally holding more than 200 people, citizens of various countries,” he said. END_OF_DOCUMENT_TOKEN_TO_BE_REPLACED

Today, May 28th, a demonstration was held in Kyiv near Presidential Administration and SBU office in support of Denis Grishchuk and Pavlo Yurov detained by separatists in Sloviansk over a month ago.

Neither of the young men is a political or military activist. Pavlo Yurov, born in Antrazit (Luhansk Oblast), is a theatre director (“Depot North” is one of his most prominent stage productions). Denis Grishchuk, born in Donetsk, has studied medicine and worked as a volunteer in many cultural organizations, including ‘Izolyatsia’. Both have moved to live and work in Kyiv quite a long ago but after watching the latest newsreels in April decided to come to their homeland and see everything with their own eyes. The price for their curiosity appeared too high as both were detained by separatists in Slovyansk April 25th. During the pat-down, separatists have found the Ukrainian flag and two tickets to Kyiv and suspecting that guys could be from Right Sector, arrested them and took them to the basement of captured Sloviansk SBU building where they are said to be kept now.

Over a month has passed but there is still no information whether the prisoners are going to be freed or not. Their relatives and friends tried to contact Ukrainian authorities, international organizations and Sloviansk ‘mayor’ Viacheslav Ponomariov. There were open letters and calls, also from Russian cultural workers. All of this has brought no result so far. There is almost no information regarding their health and moral condition. Serhiy Lefter, journalist freed from imprisonment in Sloviansk, told he had seen them and both were beaten. Denis had two ribs broken and Pavlo his nose broken. Viacheslav Ponomariov has told only that prisoners were kept in ‘tolerable’ conditions though nobody knows what this could mean.

Tired of waiting, gathering signatures and recording video appeals, activists decided to exert pressure on the authorities and remind them of their duties. So May 28th, at 9 am, about two hundred people gathered near the Presidential Administration building at Bankova street in Kyiv. There were friends and colleagues of Pavlo and Denis but also some people came to remind about the other people kept imprisoned in Sloviansk and Luhansk. As human rights organizations tell there are dozens of people kept imprisoned in terrible conditions. Many of them are locals so their relatives just cannot voice protest as they are threatened by separatists.

Representatives from Amnesty International were present at the meeting and gathered signatures in support of their petition to SBU. The petition was addressed to Valentyn Nalyvaychenko, head of the SBU personally calling to take action and free the imprisoned. The press, including main TV channels, was also present.

Unfortunately, nobody came out of the administration building so the demonstrants headed to SBU. There they were more lucky as Marina Ostapenko, SBU press secretary, came out and had a talk with activists. She made a public announcement that the department would do everything to free the detained. However, she told that SBU did not have any information concerning hostages and their conditions and that SBU should act very carefully not to make harm.

Soon after the end of meeting, Anastasiya Kasilova, one of the organizers, posted on facebook: “Thanks to everybody for their presence and support! This was really important! Our demands were heard! Thanks to press as due to your activity authorities could not ignore our picket! I hope we are going to hear good news very soon”.

Later, there was an information on the net that Valentyn Nalyvaychenko, head of the SBU, announced he would forward the process of freeing the hostages.

Another demonstration in support of all of the unknown hostages is going to be held this Friday, May 30th.

Kyiv — It has been more than three weeks that separatists have been holding theater director Pavlo Yurov and cultural volunteer Denys Hryshchuk. Friends and family of the artists say the kidnappers have not made any demands and have called the hostages “prisoners of war.” Law enforcement says the case needs to be publicized as widely as possible because that is at least one way to ensure the safety of the captives.

END_OF_DOCUMENT_TOKEN_TO_BE_REPLACED

The “active participation” by the Russian delegation in the release of foreign hostages was pure theater, according to the Security Service of Ukraine (SBU).

The SBU has uncovered evidence of Russia’s coordination and direct influence in the events surrounding the kidnapping of the OSCE military verification mission reports Espreso.TV, May 3, citing the press service of the SBU. END_OF_DOCUMENT_TOKEN_TO_BE_REPLACED

Statement of the Ministry of Foreign Affairs of Ukraine, Saturday, May 3, 2014

As a result of the joint action plan of the Ukrainian authorities, law enforcement agencies, the government of the Donetsk Oblast, and the coordinated efforts of Russian intermediaries and the special monitoring mission of the OSCE, today, May 3, the group of international and Ukrainian observers detained as hostages by extremists was released in the city of Slovyansk. END_OF_DOCUMENT_TOKEN_TO_BE_REPLACED 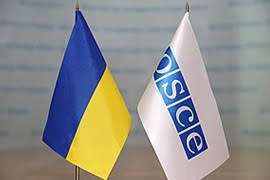 A citizen of the Russian Federation is directing the hostage taking operation in Slovyansk, reports the Ukrainian Security Service (SBU).

In a statement released by the SBU Antiterrorist center on April 26, the SBU states that the holding of the official OSCE representatives as hostages in Slovyansk is a crime planned and executed under the direction of Russian citizen Igor Strelkov, who is the leader of Russian commandos in the city. The immediate perpetrators of this crime are saboteurs “Terets” and “Abver,” the statement says.

END_OF_DOCUMENT_TOKEN_TO_BE_REPLACED

As the Ukrainian presidential website reported Thursday evening, Ukrainian Navy commander Serhiy Haiduk along with several hostages was released from detention by Russian forces in Kherson region. Russian Defense Minister Sergei Shoigu had ordered the regional authorities to free the detained hostages and allow them safe passage out of the region. The hostages were revealed to be AutoMaidan activists, and 2 are currently hospitalized.

Hostages were kept in the basement of the Republic military office in Simferopol since March 9th; the same which was seized by 100 Russian troops the day prior. According to UNIAN, the hostages said they were not fed for four days, and that the first day was especially trying as they were not allowed to drink, or the use of lavatory, and were also beaten constantly. They could not see their abusers faces as their heads were covered with bags and taped. One activist, who was placed in solitary confinement, said that there was no place to sit down, and because the room was so damp, he attempted to sleep standing up. The lone exception of the group, 64-year old Anatoly Kovalsky, said that while he was not physically beaten, he was abused mentally. In his case, he alleged that his captors constantly humiliated him and interrogators were regularly rotated every 10 minutes. According to Kovalsky, the interrogators wanted to know why the activists were in Crimea, their source of funding, if they were attempting to disrupt the referendum, and whether they had connections to Crimean Tatars or the Right Sector organization.

The two who were hospitalized, Andriy Shevchenko and Yuri Schekun, were treated for bullet wounds from a traumatic gun. Reports claim they were shot in the hands, fingers, and feet. The Center for Investigative Journalism identified the captors as members of Aksyonov’s guard.

AutoMaidan activists have in particular come under persecution from authorities over past months, with leader Dmytro Bulatov making international headlines after he was kidnapped, tortured, mutilated and crucified by who he described as Russians.

The revolution is over. People have died. Those remaining on Maidan are being encouraged to leave. The purpose of the Maidan activists has been to reboot the government, change the entire system of governance, and reaffirm human right and freedoms.

Maidan paid tribute to the fallen Heroes and greeted active participants, but it did not mention those who remain alive – the prisoners of conscience who did not submit to the criminal regime and who were imprisoned on trumped up charges under various provisions of the Criminal Code. The government [is being] rebooted through the appointment of new leaders. But the old system has not yet disappeared. The new government has a duty to protect human right and freedoms!

So what next?! Maybe someone will finally remember about them? END_OF_DOCUMENT_TOKEN_TO_BE_REPLACED