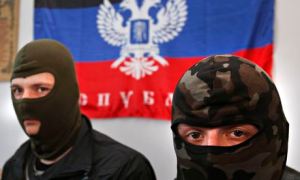 Sixteen orphans from a children’s shelter in Snizhne, in the Donetsk Oblast, were taken by force to the Russian Federation and are presently in a refugee camp in Novoshakhtinsk (Rostov Olbast), reports Voice of Ukraine, June 12.

The Ukrainian Kobzar community (musicians who play the kobza or the bandura) has issued the following statement:

“The Kobzar community of Ukraine is deeply worried about the fate of one of their brothers, the Kobzar and community activist Vasy Liutyi.  He was the emcee/leader of the meeting For a United Ukraine in the town of Rubizhne in Luhansk Oblast in eastern Ukraine.

“We have learned that that on April 21, during a meeting in support of a united Ukraine in the town of Rubizhne, Liutyi was severely beaten and then arrested.  During his arrest, he was tortured. We condemn the excesses of Russian chauvinists and protest against the inaction of the law enforcement authorities. We demand the immediate release of the composer and Kobzar Vasyl Liutyi. END_OF_DOCUMENT_TOKEN_TO_BE_REPLACED

The Special Service of Ukraine (SSU) detained two Russian Federation citizens in Lviv oblast. The suspects wanted to kidnap some persons, among them a candidate for the President of Ukraine. However, the SSU did not release the name of the candidate who had been targeted for kidnapping.  END_OF_DOCUMENT_TOKEN_TO_BE_REPLACED

END_OF_DOCUMENT_TOKEN_TO_BE_REPLACED

VICE News correspondent Simon Ostrovsky travels to various parts of Crimea in this series on the invasion, occupation, illegal referendum and overall crisis in Crimea, Ukraine. The series continues, so keep an eye out for new episodes. Since there are so few cameras allowed on the ground there, this is a rare chance to see the people involved and get a sense of the tensions, the weaponry, and many of the details we’ve been blogging about in text form, on camera.

Russian Roulette: The Invasion of Ukraine (Dispatch One) 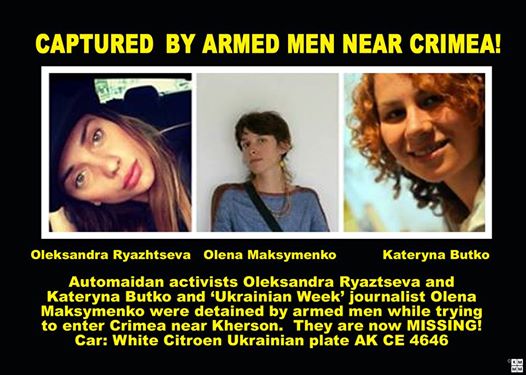 On March 9, 2014 at the entrance to the Crimea while crossing the border in city of Armiansk two activists of social organization Automaidan, Kateryna Butko and Olexandra Ryazantseva, as well as a journalist of “Tyzhden” Olena Maksymenko, were detained and taken to unknown destination. All three are women. END_OF_DOCUMENT_TOKEN_TO_BE_REPLACED