According to the Kyiv Patriarchy, June 19th may the start of the Church division countdown

The Kyiv Patriarchy warns about the provocations surrounding the visit of the Moscow Patriarch Kirill to Ukraine on the Day of the Baptism of Rus, prepared by Russia.

The statement on the official web page of the Ukrainian Orthodox Church of the Kyiv Patriarchy says that the impression of danger to the head of the MP in Kyiv will be created using Russian propaganda.  END_OF_DOCUMENT_TOKEN_TO_BE_REPLACED

Holding early elections to the Parliament is one of Petro Poroshenko’s electoral promises. In his inauguration speech, the President confined that he would not go back on his word: “The current Verkhovna Rada is not in accordance with the moods of society,” he stated, guaranteeing a full government reboot.

The rating of old parliamentary members is inevitably falling. The elections to the Kyiv Council confirmed the social demand for new political powers, and the early elections to the Verkhovna Rada of Ukraine will make this trend more noticeable. However, it frequently turns out that in practice the new parties can only be called “rookies” arbitrarily – some projects have existed for several years, and they include experienced political figures.

Forbes proposes to get acquainted with the political start-ups and their perspectives. END_OF_DOCUMENT_TOKEN_TO_BE_REPLACED

Brussels – The trilateral talks regarding the solution of the Russian-Ukrainian gas conflict, which is carried out with the involvement of the EU, have hit a dead end. Yet another round of talks in Brussels have ended without any results. The Russian offer of the $100 discount was refused by Kyiv. Meanwhile the EU Commission is counting on finding compromise regarding the loan payments and the gas prices for Ukraine before next Monday.
END_OF_DOCUMENT_TOKEN_TO_BE_REPLACED

Vitaliy Klitschko has not even spent a week as mayor, but he has already discredited himself. He appointed as his chief advisor, or head of his advisors group, a certain Ihor Nikonov.

This person is not familiar to ordinary readers. I’ll explain: he is one of the most aggressive developers in Kyiv, someone who directly says that he dreams of building a skyscraper in Kyiv that he saw in New York some time ago. Moreover, Nikonov is a partner of Dmitriy Firtash and Vagif Akiev and the godfather and nearest neighbor to Serhiy Lyovochkin. The Klitschko brothers got acquainted with Nikonov since he worked together with Ihor Bakay and the brothers were under the roof of the gas oligarch.  END_OF_DOCUMENT_TOKEN_TO_BE_REPLACED 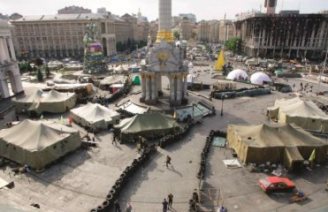 The newly elected mayor of Kyiv, Vitaliy Klitschko, has announced that Maidan – the heart of the Euromaidan revolution in the center of Kyiv – will be cleared in the near future. We agree. Euromaidan has driven the dictator out; and it is now time to rebuild the nation. The people still on Maidan should either go to fight the Russian invasion in the east; or return to their communities, and ensure that corruption is cleansed from the nation – even in the smallest villages. END_OF_DOCUMENT_TOKEN_TO_BE_REPLACED

Vgorode has complied the most widespread complaints at what is happening in the very centre of the city.

END_OF_DOCUMENT_TOKEN_TO_BE_REPLACED

They want to turn Maidan into an “Idea Generator,” only leaving representatives of artistic circles there.

The party “Right Sector” intends to put Maidan Nezalezhnosti in order – remove the barricades and unblock the roads in the centre of Kyiv. This was stated by member of the political council of the party, head of the Kyiv organisation “Social-National Assembly” (Right Sector – East) Igor Krivoruchko, reports “Interfax.”

END_OF_DOCUMENT_TOKEN_TO_BE_REPLACED

The former president has issued another statement from Rostov-on-Don.

Today the Russian mass media published another text address from former president of Ukraine and fugitive Viktor Yanukovych. In his statement, he talks about bad signs for the early career of the new government in Ukraine and, in particular, new president Petro Poroshenko.

END_OF_DOCUMENT_TOKEN_TO_BE_REPLACED

Olexandr Lashchenko: Few of you, dear listeners, do not know that Oleg Musiy was one of the most active participants of Maidan, giving medical aid to the wounded. By the way, with risk to his own life.

END_OF_DOCUMENT_TOKEN_TO_BE_REPLACED

The vow of the will-be mayor Vitalii Klitschko to clear Khreschatyk Street from protester’s tents to enable traffic in Kyiv had provoked Maidan civil communities to create and sign a Manifesto on the development of Maidan. END_OF_DOCUMENT_TOKEN_TO_BE_REPLACED