Euromaidan has survived the night of confrontations with security forces. Maidan Nezalezhnosti greeted the new day by singing the National Anthem and other songs.

Several minibuses from Lviv have arrived to help Kyiv. According to those arriving, many more Lviv residents are heading to Kyiv. Speakers are delivering speeches from the stage, and people are breaking up the brick pavements – to use them for fighting back in case of the assault. END_OF_DOCUMENT_TOKEN_TO_BE_REPLACED

Tymoshenko: opposition may lead the government under 3 conditions. In her interview to Dzerkalo Tyzhnia, Yulia Tymoshenko named three conditions under which opposition would be ready to lead the new government. According to her, this would be possible after full rehabilitation of the charged EuroMaidan activists, if opposition controls all or most of the ministers and if the new Prime Minister receives mandate to sign the association agreement with the EU. The convicted opposition leader, however, is skeptical on the ability of an opposition Prime Minister to work under President Yanukovych. END_OF_DOCUMENT_TOKEN_TO_BE_REPLACED 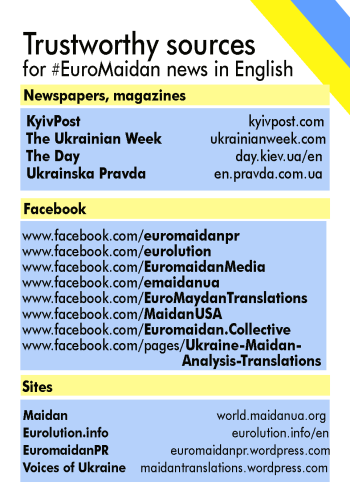 END_OF_DOCUMENT_TOKEN_TO_BE_REPLACED

Parliament passed PoR drafted amnesty law. In the late evening of 29 January Ukrainian Parliament passed the Party of the Regions drafted amnesty law with 232 MPs out of 450 voted in favour. The law foresees amnesty for protestors if the seized administrative buildings and transport roads are cleared from demonstrators. The law also gives protesters two weeks to fulfill these demands. Ukrainian media underlined that the bill was adopted after Victor Yanukovych, Ukraine’s President, and members of his administration came to the Parliament to persuade PoR MPs to back this bill. An amnesty bill prepared by opposition did not impose any conditions for protestors’ liberation.

END_OF_DOCUMENT_TOKEN_TO_BE_REPLACED

Courts rule arrest of 49 persons detained during Hrushevskoho street clashes. Kyiv district courts ruled arrest of 49 persons suspected in engaging into mass riots on Hurshevskoho street. The detained are subject to possible 8- to 15-year imprisonment. 14 more are under home arrest. According to a statistics provided by Lb.ua, a news website, the number of the arrested on political reasons these days reached 66 people.

Court imposes 2-month imprisonment over an Automaidan leader. One of Automaidan leaders, Serhiy Hadzhynov, was imprisoned for 2 months, his lawyer Dmytro Vovdiy said. The court’s decision could have been taken in response to the events related to people’s attack on Cherkasy regional state administration on 26-27 January. Hadzhynov, meanwhile, denied he had been involved in any infringements of the law. END_OF_DOCUMENT_TOKEN_TO_BE_REPLACED

Azarov stepped down. Mykola Azarov, Ukraine’s Prime Minister, stepped down, Ukrainska Pravda reported with reference to the government’s press service. The Prime Minister explained his resignation with the need to find a compromise amid the ongoing crisis. Azarov, however, noted that his government did everything possible for peaceful resolution of the conflict, adding that the government’s actions were lawful.